In chapter 18, “Python Functions,” we learned that a function should use only variables that have either been defined within the block of the function, or passed in explicitly as parameters (Rule 1). This rule works closely with our definition of a variable in Python, as a name that refers to some data.

This is a powerful concept, allowing us to pass parameters to functions and get returned values. In Python, a single piece of data may be referenced by multiple variables. Parameter variables are new names for the same data. We can explore this concept with a simple example.

In this code sample, we have created a single list, but we are associating two variable names with it, nums and numsb. When we modify the list through one name, the change is reflected through the other (we can only change the data because lists are mutable, but even immutable data may be referred to by multiple names).

The same thing happens when we use a parameter in a function. Let’s revisit the gc_content() function, which makes use of a base_composition() function that we wrote (but leave out here for clarity). In this listing, all of the variable names belonging to the function are highlighted in red, whereas other “global” variable names are highlighted in purple and underlined with a dashed line. According to Rule 1, we shouldn’t see any purple/underlined variables in the function definition. 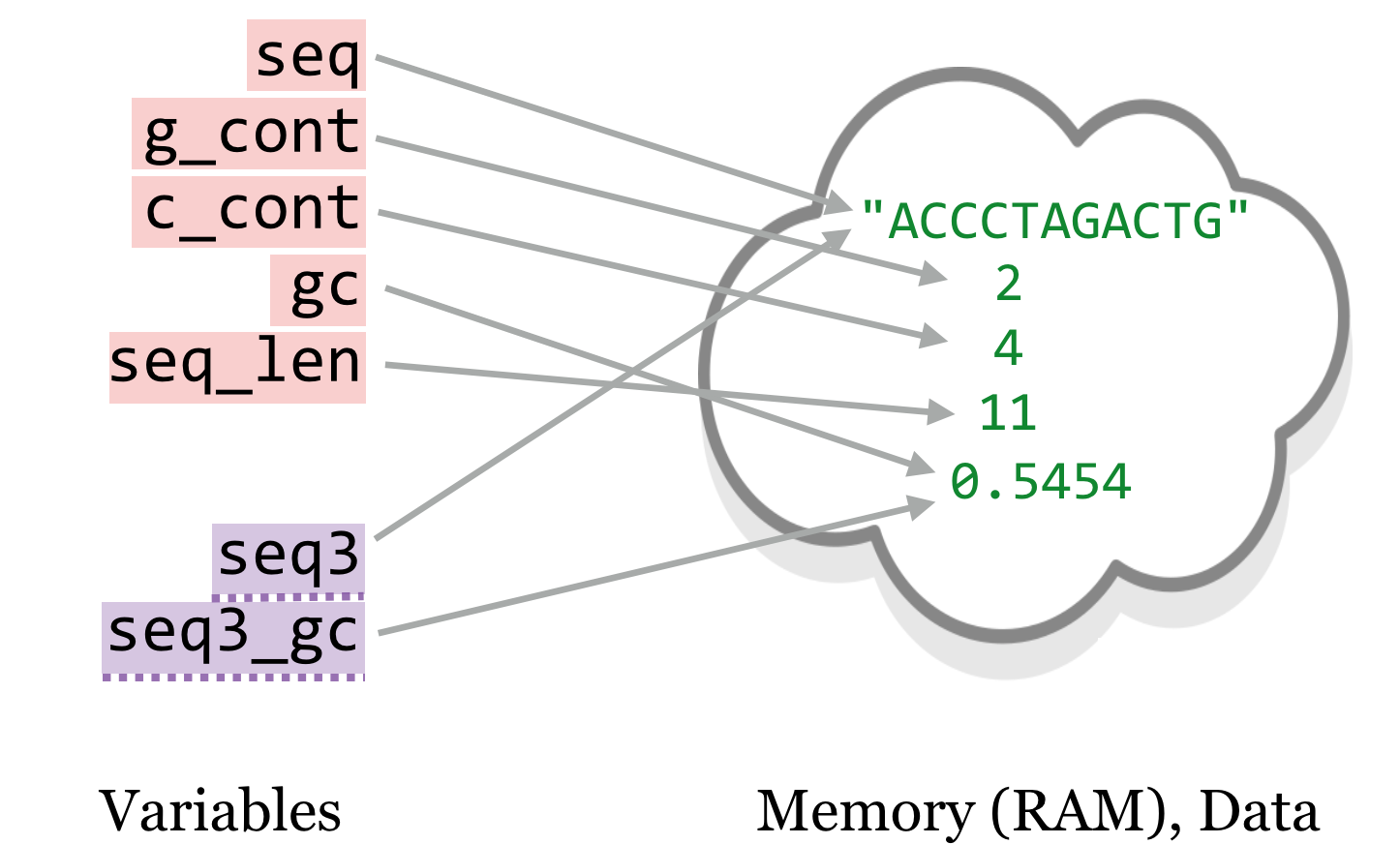 In fact, we cannot. The above print(gc) line, even after the computation of seq3_gc, would produce a NameError: name 'gc' is not defined. This error occurs because variables have scope, and the gc variable’s scope is limited, from the time it is defined to the end of the function block in which it is defined (all of the red-highlighted variables share this feature). Variables with limited scope are called local variables. A variable’s scope is the context in which can be used. It defines “how long the variable lives,” or “where the variable exists.” A variable with limited scope, as in the execution of a function, is called a local variable.

After the function call ends, the picture would look more like so: 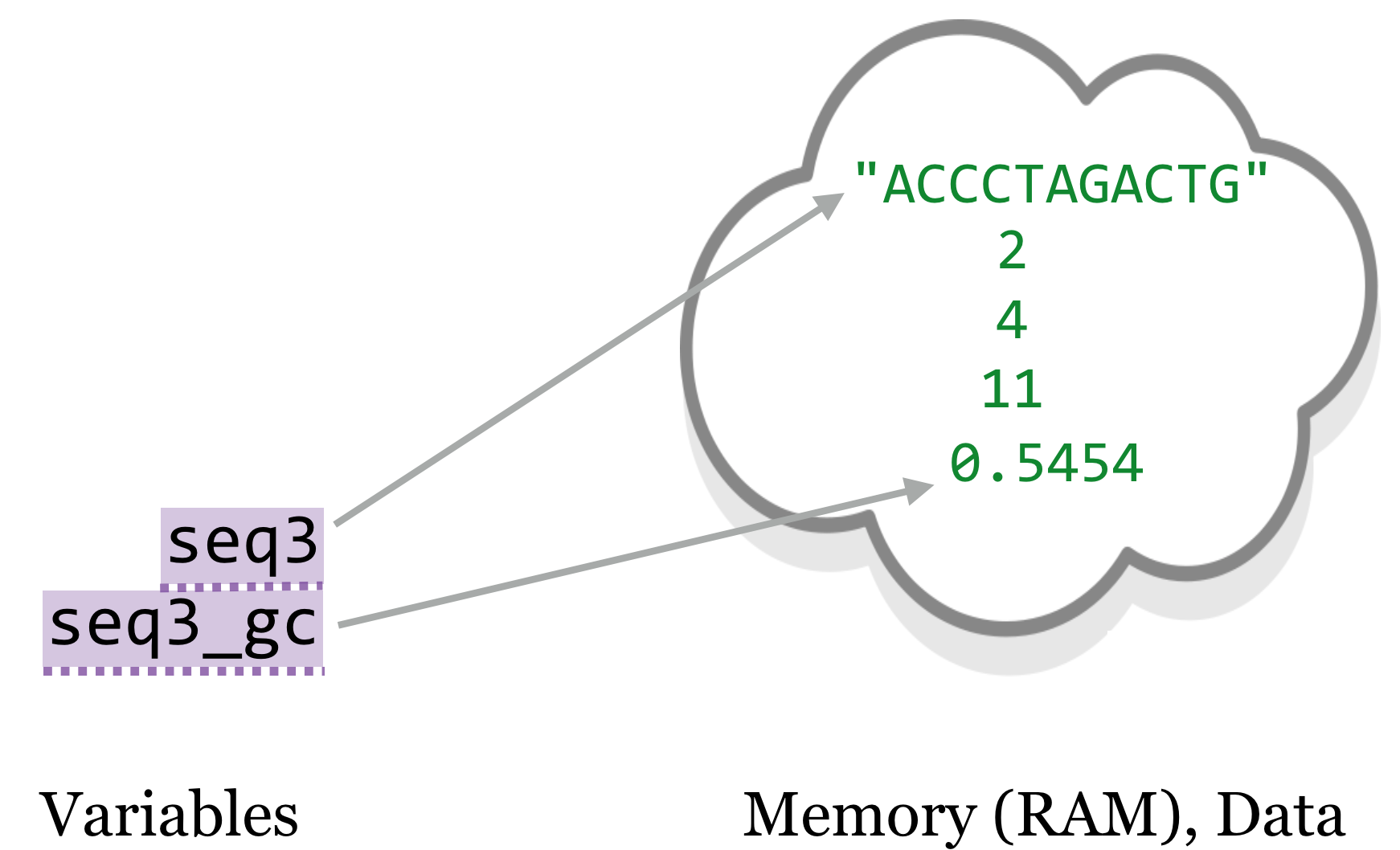 Eventually, the garbage collector will notice that no variables refer to the data 2, 4, and 11, and it will clear those out of RAM to make room for new data.

Because scope talks about variables, it has little to do with the data to which a variable refers—except to say that data are garbage collected when there are no variables referring to that data in any current scope. Nevertheless, because the gc variable is not in scope after the function ends, we can’t use it outside of the function block.

What do you think the last line, print(gc), will print? If you guessed "Measure of G and C bases in a sequence", you are right! Even though the gc_content() function defines its own gc variable, because this variable is local, it does not “step on” the outside gc variable. In summary:

One of the important lessons of scope is knowing when it might lead to trouble. This is easiest to see if we were to compare how scoping works with another language, C++ in this case. In C++, variables are declared with their types, and variables declared within an if-statement block (or any other block) are also local to that block. This means that they go out of scope when the block ends. If we were to try and use them outside of the block in which they were declared, an error would occur.

In Python, on the other hand, variables declared in if-statements, for-loop blocks, and while-loop blocks are not local variables, and stay in scope outside of the block. Thus we say that C++ has “block-level” scoping, while Python uses only “function-level” scoping. The brackets in the figure below illustrate the scope for some variables in equivalent C++ and Python code. Because C++ uses block-level scoping, and x and y are declared inside of blocks, we cannot access their contents outside of those blocks.

This might seem like an advantage for Python, but in this case we think that that C++ may have it right. After all, if we needed for the y and z variables to be accessible after the if-blocks in the C++ example, we could have declared them along with x. We might even have given them a default value to hold using declarations like int y = -1 and int z = -1; if these variables still hold -1 after the if-blocks are run, then we know that those internal lines didn’t execute. This would be especially helpful if the value of x wasn’t set to five as it is here, but rather is dependent on the input data.

In Python, on the other hand, code like this might cause a problem. If the x variable is dependent on the input data, then the y and z variables might never be set at all, leading to an eventual NameError when they are later accessed. We certainly shouldn’t consider any program that sometimes produces an error, depending on the input data, to be very good!

Probably the best way around this sort of problem is to pretend that Python uses block-level scoping, declaring variables in the widest block/level in which they will be used. None is a good default value that we can later check for if we want to conditionally execute later code on the basis of whether variables were actually set to something useful:

This code will not crash, no matter the value of x. Setting initial values for these variables to None before the if-blocks also provides a reminder and visual clue that these variables are intended to be used outside of the nested if-blocks, and that we should check their contents before using them later.

C++ and other block-level-scoped languages thus encourage “short-lived” variables, which is a good programming mantra. Defining variables only when needed and using them for as short a time as possible helps to produce clearer, more modular, and even more efficient code (because short-lived variables allow the garbage collector to clean out more data). In a way, breaking Rule 1 of functions is a similar type of abuse of variable scope. 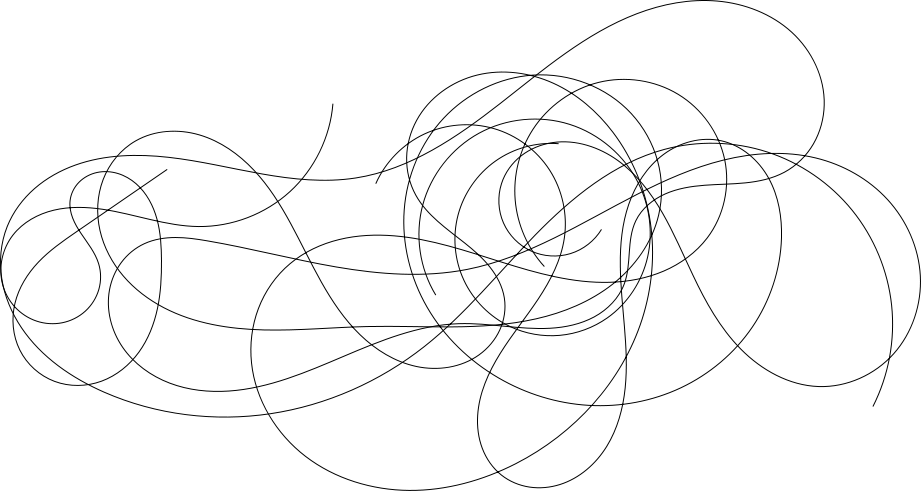 Beginning programmers often find it easier to avoid these conventions by setting a large number of variables near the beginning of a program and then accessing and setting them at various points throughout the program. This is sometimes colloquially called “spaghetti code,” because the long-distance connections created between the different areas of code resemble spaghetti. Rarely does this strategy pay off, however.

As discussed in chapter 25, “Algorithms and Data Structures,” local variables and similar concepts allow us to solve complex problems in fascinating and elegant ways.