In previous chapters, we used a simple fasta_stats program to perform basic analyses on a FASTA file called pz_cDNAs.fasta, mostly as an excuse to learn about the standard streams and tools like grep and sort. It turns out that the information in the pz_cDNAs.fasta file provides us with many potential questions to ponder.

The sequences in this file are actually a subset of putative transcripts, produced from a de novo transcriptome assembly for the butterfly Papilio zelicaon. Each sequence header line encodes a variety of information: the second and third columns of the header lines reveal the number of reads contributing to each assembled sequence and the average coverage of the sequence (defined as the total number of bases contributed by reads, divided by the assembled sequence length). Even the sequence IDs encode some information: they all start with a pseudorandom identifier, but some have a suffix like _TY.

Groups of sequences that share the same _ suffix were previously identified as having shared matches using a self-BLAST. Sequence IDs without such a suffix had no matches. We might ask: how many sequences are in such a group? This could be easily answered by first using grep to extract lines that match > (the header lines), and then using another grep to extract those with the pattern _ (those in a group) before sending the result to wc.

A more complex question would be to ask how many different groups are represented in the file. If the group information was stored in a separate column (say, the second column), this question could be answered with the same process as above, followed by a sort -k2,2d -u to remove duplicate group identifiers. But how can we coerce the group information into its own column? We could do this by substituting instances of _ with spaces. The sed (Stream EDitor) tool can help us. Here’s the overall pipeline we’ll use:

And here is some of the output, where only sequences in groups are represented and each group is represented only once (replacing the less -S with wc would thus count the number of groups):

The sed tool is a sophisticated program for modifying input (either from a file or standard input) and printing the results to standard output: sed '<program>' <file> or ... | sed '<program>'.

Like awk, sed hails from the 1970s and provides a huge variety of powerful features and syntax, only a tiny fraction of which we’ll cover here. In particular, we’ll focus on the s, or substitution, operation. 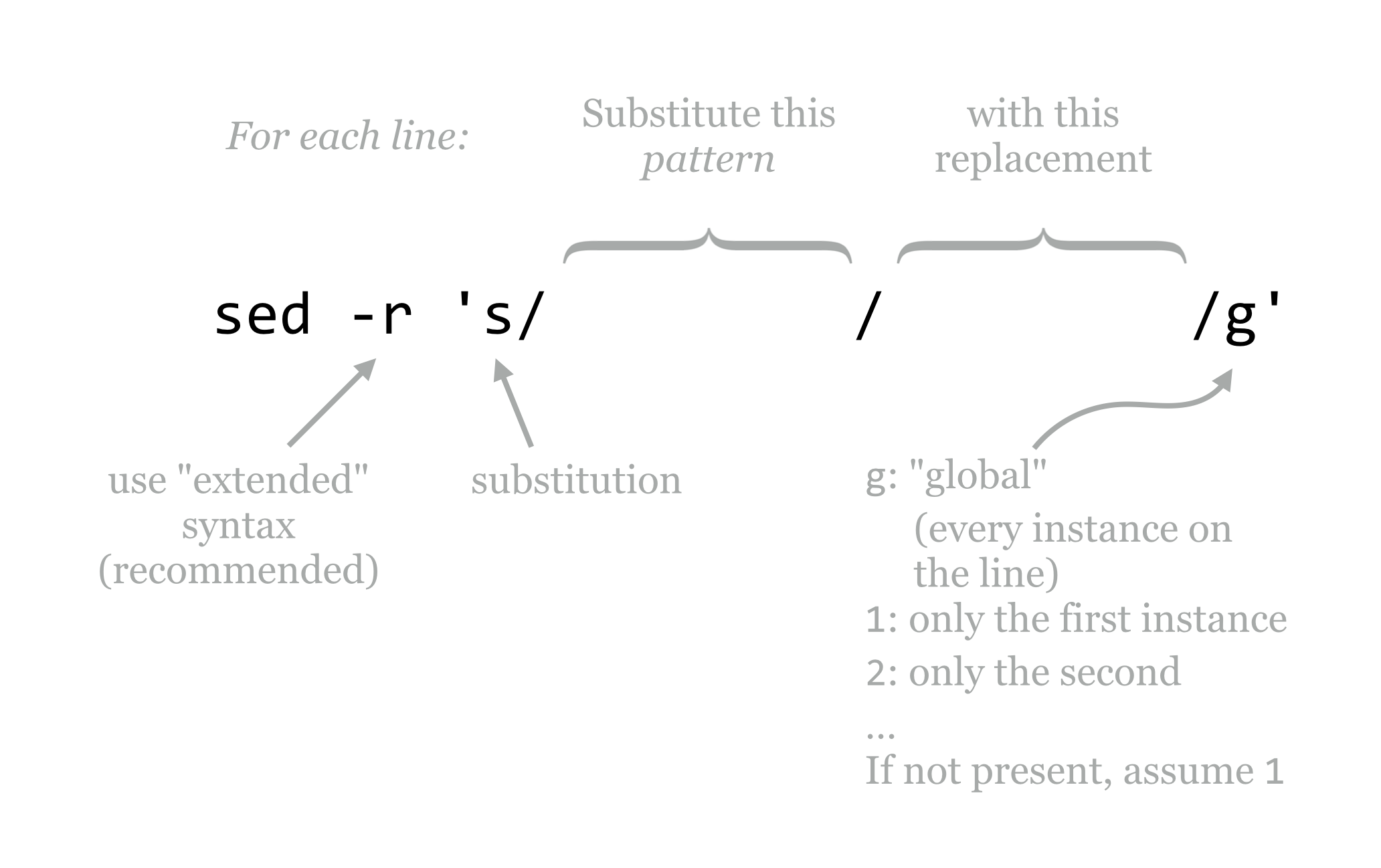 In the example above, the entire pattern was specified by _, which is not a meta-operator of any kind, and so each instance of _ was replaced by the replacement (a space character). The meta-operators that are supported by regular expressions are many and varied, but here’s a basic list along with some biologically inspired examples:

So far our patterns aren’t really all that flexible, because most of the pieces covered to this point match a single character. The next five meta-operators resolve that limitation.

Using these pieces, we can put together a regular expression that serves as a simple (and not actually useful in practice) open reading frame finder. For prokaryotic sequences (where introns are not a consideration), we’ll define these as a start codon ATG, followed by one or more codons, followed by one of the three canonical stop codons TAA, TAG, or TGA. The pattern for the start is ATG, and we’ve seen how we can encode a stop above, with ((TAA)|(TAG)|(TGA)). How about “one or more codons?” Well, “one or more” is embodied in the + operator, and a codon is any three A’s, T’s, C’s, or G’s. So, “one or more codons” is encoded as ([ACTG]{3,3})+. Thus the regular expression for our simple open reading frame finder is:

Notice that the string TAG is both a type of codon in general ([ACTG]{3,3}) and a stop, so technically both of the first two options are valid according to the regular expression. By the rules of greediness, the first will be matched, which we can verify with a simple echo and sed.

The regular expression syntax used by sed is similar to the syntax used in languages such as Perl, Python, and R. In fact, all of the examples we’ve seen so far would work the same in those languages (though they are applied by their own specific functions rather than a call to sed). One helpful feature provided by more modern regular expression engines like these is that operators like * and + can be made nongreedy (though I prefer the clearer term “reluctant”) by following them with a question mark. In Python, the regular expression ATG([ACTG]{3,3})+?((TAA)|(TAG)|(TGA)) would match the second option. (When not following a *, or +, it makes the previous optional; thus TG(T)?CC is equivalent to TG(T){0,1}CC.) More sophisticated features allow the user to access all the matches of a pattern, even if they overlap, so that the most satisfying one can be pulled out by some secondary criteria. Unfortunately, sed does not support nongreedy matching and several other advanced regular expression features.

Character Classes and Regular Expressions in Other Tools

We often wish to use charset brackets to match any one of a “class” of characters; for example, [0123456789] matches any single digit. Most regular expression syntaxes (including that used by sed) allow a shorthand version [0-9] (if we wanted to match only a 0, 9, or -, we could use [09-]). Similarly, [a-z] matches any single lowercase letter, and [A-Z] any uppercase letter. These can even be combined: [A-Za-z0-9] matches any digit or letter. In the POSIX extended syntax used by sed, 0-9 can also be specified as [:digit:]. Notice the lack of brackets in the former—to actually match any single digit, the regular expression is [[:digit:]] (which, yes, is annoying). To match any nondigit, we can negate the bracketed set as [^[:digit:]].

These POSIX character classes are especially useful when we want to match character types that are difficult to type or enumerate. In particular, [[:space:]] matches one of any whitespace character (spaces, tabs, newlines), and [[:punct:]] matches any “punctuation” character, of which there are quite a few. The [[:space:]] character class is particularly helpful when you are reformatting data stored in rows and columns but are not sure whether the column separators are spaces, tabs, or some combination.

As it turns out, regular expressions can be utilized by grep as well as awk. When using grep, we can specify that the pattern should be treated as an extended regular expression by adding the flag -E (as opposed to the -r used for sed.) Thus grep -E '[[:digit:]]+' extracts lines that contain an integer.

According to the definition above for the header lines in the pz_cDNAs.fasta file, the IDs should be characterizable as a pseudorandom identifier followed by, optionally, an underscore and a set of capital letters specifying the group. Using grep '>' to extract just the header lines, we can inspect this visually:

If we send these results through wc, we see that this file contains 471 header lines. How can we verify that each of them follows this pattern? By using a regular expression with grep for the pattern, and comparing the count to 471. Because IDs must begin immediately after the > symbol in a FASTA file, that will be part of our pattern. For the pseudorandom section, which may or may not start with PZ but should at least not include an underscore or a space, we can use the pattern [^_[:space:]]+ to specify one or more nonunderscore, nonwhitespace characters. For the optional group identifier, the pattern would be (_[A-Z]+){0,1} (because {0,1} makes the preceding optional). Putting these together with grep -E and counting the matches should produce 471.

All of the headers matched the pattern we expected. What if they hadn’t? We could inspect which ones didn’t by using a grep -v -E to print the lines that didn’t match the pattern.

Now, hypothetically, suppose a (stubborn, and more senior) colleague has identified a list of important gene IDs, and has sent them along in a simple text file.

Unfortunately, it looks like our colleague has decided to use a slightly altered naming scheme, appending -gene to the end of each pseudorandom identifier, before the _, if it is present. In order to continue with peaceful collaborations, it might behoove us to modify our sequence file so that it corresponds to this scheme. We can do this with sed, but it will be a challenge, primarily because we want to perform an insertion, rather than a substitution. Actually, we’ll be performing a substitution, but we’ll be substituting matches with contents from themselves!

Regarding back-references, in a regular expression, matches or submatches that are grouped and enclosed in parentheses have their matching strings saved in variables \1, \2, and so on. The contents of the first pair of parentheses is saved in \1, the second in \2 (some experimentation may be needed to identify where nested parentheses matches are saved). The entire expression match is saved in \0.

To complete the example, we’ll modify the pattern used in the grep to capture both relevant parts of the pattern, replacing them with \1-gene\2.

The contents of pz_cDNAs.fasta, after running it through the sed above, are as follows:

Back-references may be used within the pattern itself as well. For example, a sed -r 's/([A-Za-z]+) \1/\1/g' would replace “doubled” words ([A-Za-z]+) \1 with a single copy of the word \1, as in I like sed very very much, resulting in I like sed very much. But beware if you are thinking of using substitution of this kind as a grammar checker, because this syntax does not search across line boundaries (although more complex sed programs can). This example would not modify the following pair of lines (where the word the appears twice):

A few final notes about sed and regular expressions in general will help conclude this chapter.

Some people, when confronted with a problem, think, “I know, I’ll use regular expressions.” Now they have two problems.