Functions (sometimes called “subroutines”) are arguably the most important concept in programming. We’ve already seen their use in many contexts, for example, when using functions like len() and float(). Here’s a bit of code that computes the GC content of a DNA sequence in a variable called seq:

What if we wanted to compute the GC content for multiple different variables in our code? Should we rewrite our GC-computing for-loop for each different variable? No way! First, we’d be at a much higher risk of bugs (it’s a probabilistic fact that more typing leads to more typos). Second, the whole point of programming is for the computer to do all the work, not us.

Ignoring point 2, functions can actually represent a mathematical ideal: they relate inputs to outputs. They even have domains (the set of all valid inputs) and ranges (the set of all potential outputs).

We define functions in Python using the def keyword, and in Python functions must be defined before they can be executed. Here’s an example function that computes a “base composition” (count of a character in a given string) given two parameters: (1) the sequence (a string) and (2) the base/character to look for (also a string).

One of the best things about functions is that they can call other functions, provided they’ve already been defined at the time they are called. 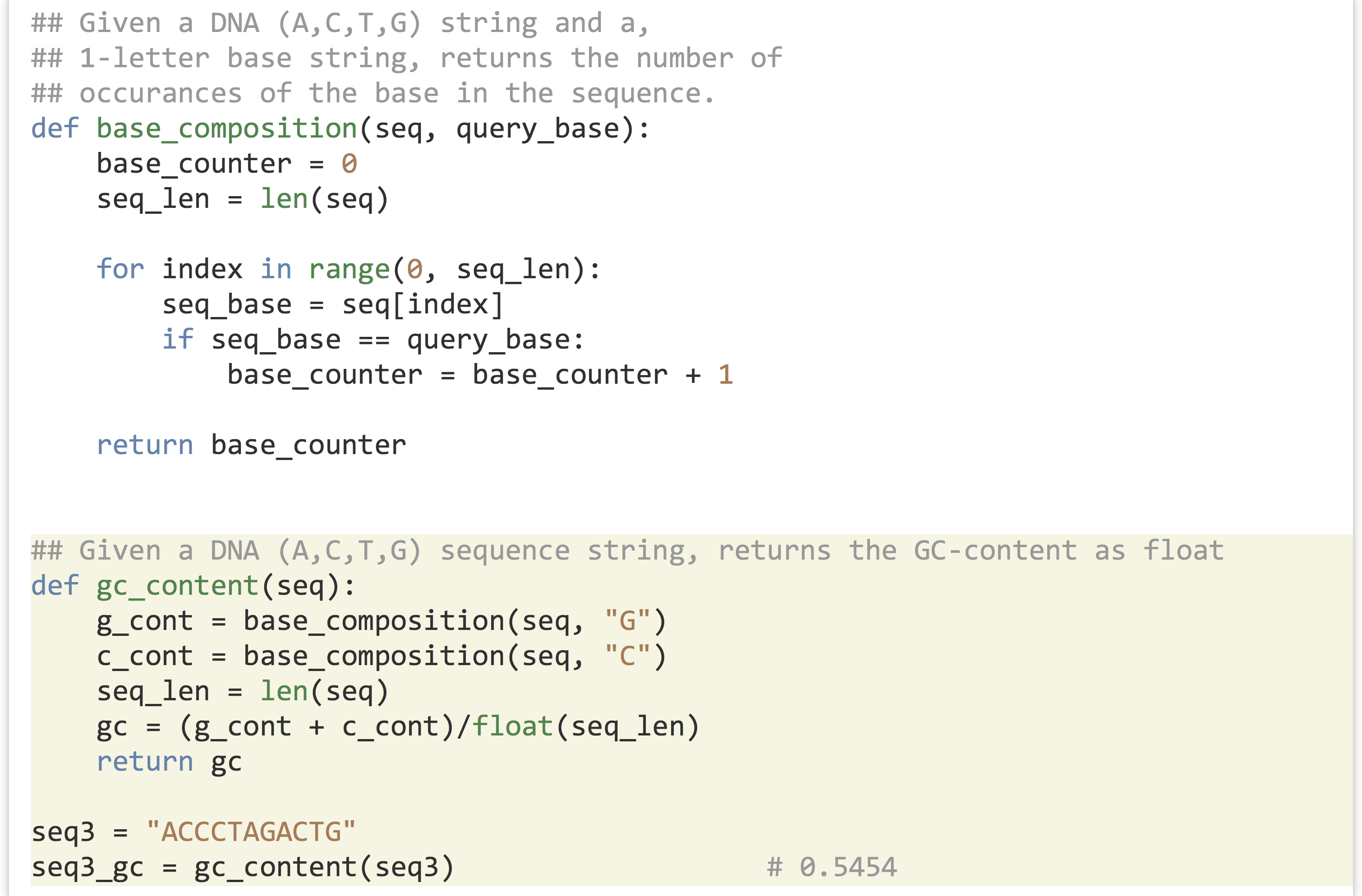 Because functions need only to be defined before they are called, it is common to see collections of functions first in a program. Further, the order of definition need not correspond to their order of execution: either the gc_content() or the base_composition() function definition could occur first in this file and the computation would still work.

The idea of encapsulating small ideas into functions in this way is a powerful one, and from this point forward you should attempt to think mostly in terms of “what function am I writing/do I need,” rather than “what program am I writing?”

In an effort to produce clean, readable, and reusable code, you should strive to follow these rules when writing functions.

In chapter 17, “Conditional Control Flow,” one of the exercises involved computing the molecular weight for each sequence in a tab-separated file of IDs and sequences, ids_seqs.txt. Here are the lines of this file viewed with less -S:

If you completed the molecular weight exercise in chapter 17, you might have found it somewhat challenging. Without using functions, you likely needed to use a for-loop to iterate over each line of the file, and within there another for-loop to iterate over each base of the current sequence, and inside of that an if-statement to determine the molecular weight of each base.

Here we’ll write a similar program, except this time we’ll make use of a function that returns the GC content of its parameter. The entire solution is actually quite short and readable. 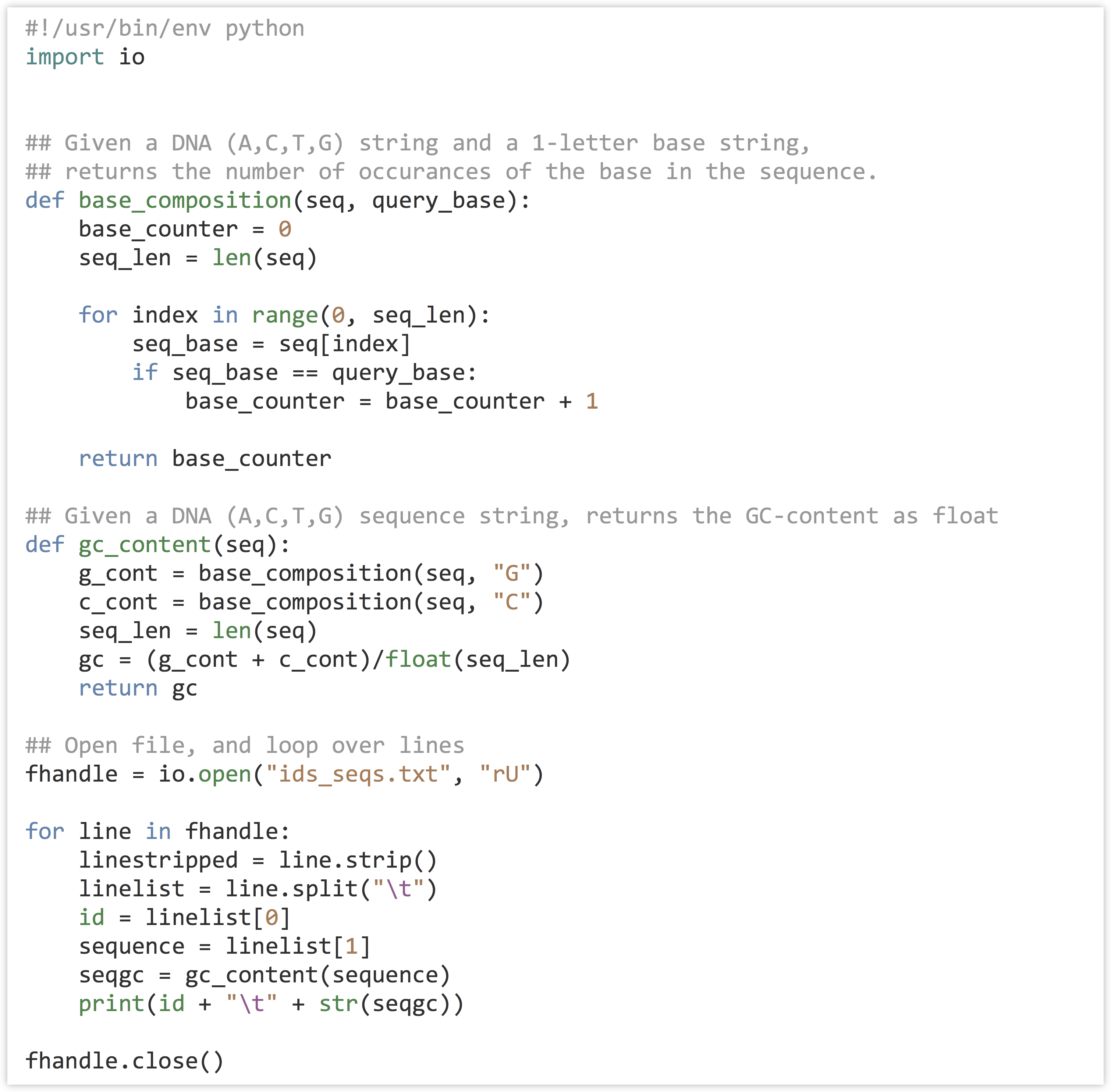 In the above code (ids_seqs_gcs.py), there’s a clear “separation of concerns” that makes designing a solution easier. One function handles counting bases in a DNA sequence, and another the computation of the GC content. With those out of the way, we can turn our focus to parsing the input file and printing the output.

To simplify exposition, most of the small code samples in the next few chapters don’t involve creating new functions. Most of the exercises will suggest writing functions as a means of breaking a problem down into its component parts, however.