While the previous chapters covered installing and using a few bioinformatics tools as examples of the process, there is one nearly ubiquitous tool: BLAST, or Basic Local Alignment Search Tool.[1]

Given one or more query sequences (usually in FASTA format), BLAST looks for matching sequence regions between them and a subject set.

A sufficiently close match between subsequences (denoted by arrows in the figure above, though matches are usually longer than illustrated here) is called a high-scoring pair (HSP), while a query sequence is said to hit a target sequence if they share one or more HSPs. Sometimes, however, the term “hit” is used loosely, without differentiating between the two. Each HSP is associated with a “bitscore” that is based on the similarity of the subsequences as determined by a particular set of rules. Because in larger subject sets some good matches are likely to be found by chance, each HSP is also associated with an “E value,” representing the expected number of matches one might find by chance in a subject set of that size with that score or better. For example, an E value of 0.05 means that we can expect a match by chance in 1 in 20 similar searches, whereas an E value of 2.0 means we can expect 2 matches by chance for each similar search.

BLAST is not a single tool, but rather a suite of tools (and the suite grows over the years as more features and related tools are added). The most modern version of the software, called BLAST+, is maintained by the National Center for Biotechnology Information (NCBI) and may be downloaded in binary and source forms at ftp://ftp.ncbi.nlm.nih.gov/blast/executables/blast+/LATEST/.

This chapter only briefly covers running BLAST on the command line in simple ways. Reading the help information (e.g., with blastn --help) and the NCBI BLAST Command Line Applications User Manual at http://www.ncbi.nlm.nih.gov/books/NBK1763/ is highly recommended. The NCBI manual covers quite a few powerful and handy features of BLAST on the command line that this book does not.

The programs in the BLAST+ suite can search for and against sequences in protein format (as we did for the HMMER example) and in nucleotide format (A’s, C’s, T’s, and G’s). Depending on what type the query and subject sets are, different BLAST programs are used. 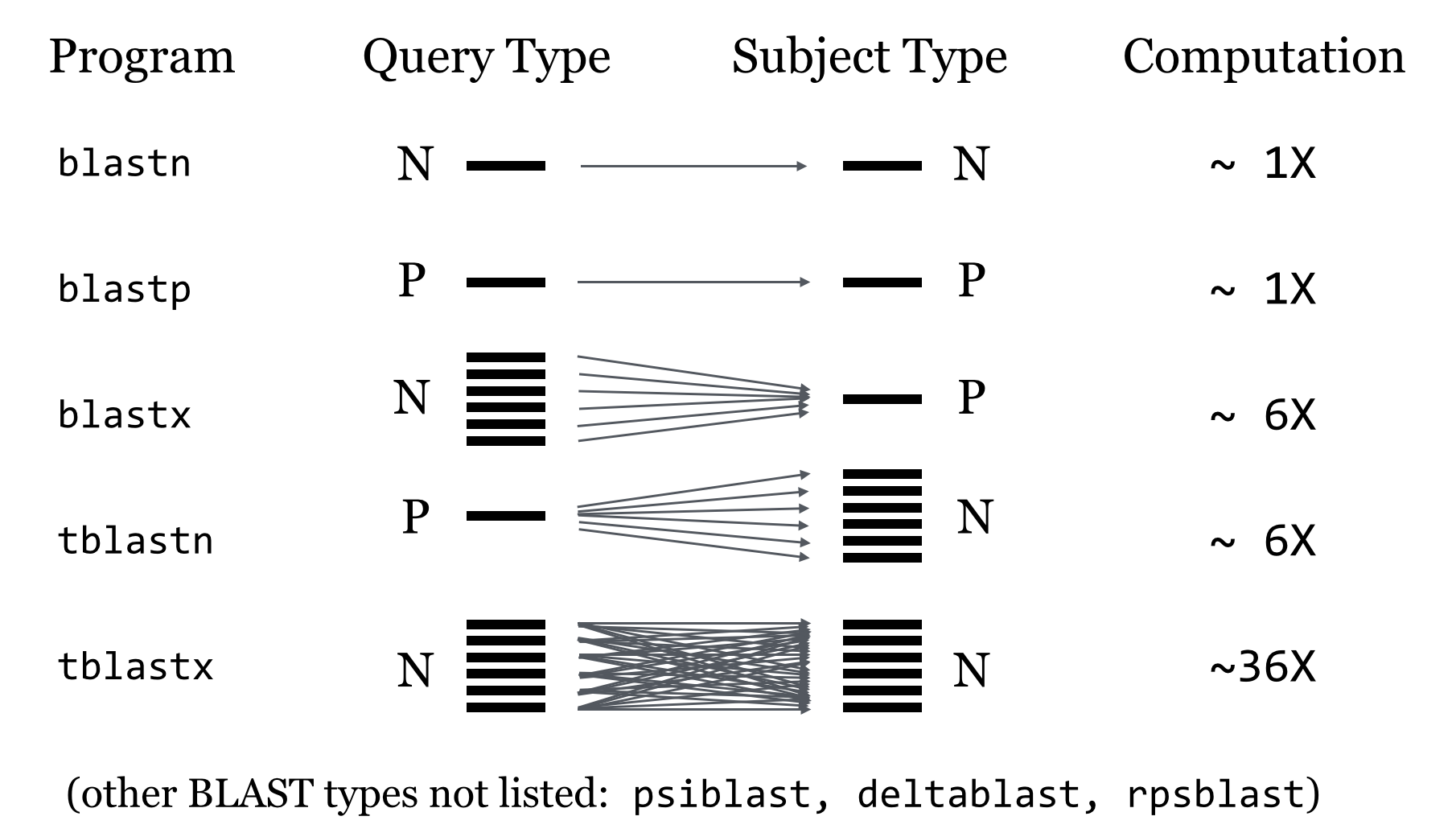 Other more exotic BLAST tools include psiblast, which produces an initial search and tweaks the scoring rules on the basis of the results; these tweaked scoring rules are used in a second search, generally finding even more matches. This process is repeated as many times as the user wishes, with more dissimilar matches being revealed in later iterations. The deltablast program considers a precomputed database of scoring rules for different types of commonly found (conserved) sequences. Finally, rpsblast searches for sequence matches against sets of profiles, each representing a collection of sequences (as in HMMER, though not based on hidden Markov models).

All this talk of scoring rules indicates that the specific scoring rules are important, especially when comparing two protein sequences. When comparing protein sequences from two similar species, for example, we might wish to give a poor score to the relatively unlikely match of a nonpolar valine (V) to a polar tyrosine (Y). But for dissimilar species separated by vast evolutionary time, such a mismatch might not be as bad relative to other possibilities. Scoring matrices representing these rule sets with names like BLOSUM and PAM have been developed using a variety of methods to capture these considerations. A discussion of these details can be found in other publications.

Each of the various programs in the BLAST suite accepts a large number of options; try running blastn -help to see them for the blastn program. Here is a summary of a few parameters that are most commonly used for blastn et al.:

No doubt readers familiar with BLAST have been curious: aren’t there databases of some kind involved in BLAST searches? Not necessarily. As we’ve seen, simple FASTA files will suffice for both the query and subject set. It turns out, however, that from a computational perspective, simple FASTA files are not easily searched. Thus BLAST+ provides a tool called makeblastdb that converts a subject FASTA file into an indexed and quickly searchable (but not human-readable) version of the same information, stored in a set of similarly named files (often at least three ending in .pin, .psq, and .phr for protein sequences, and .nin, .nsq, and .nhr for nucleotide sequences). This set of files represents the “database,” and the database name is the shared file name prefix of these files. 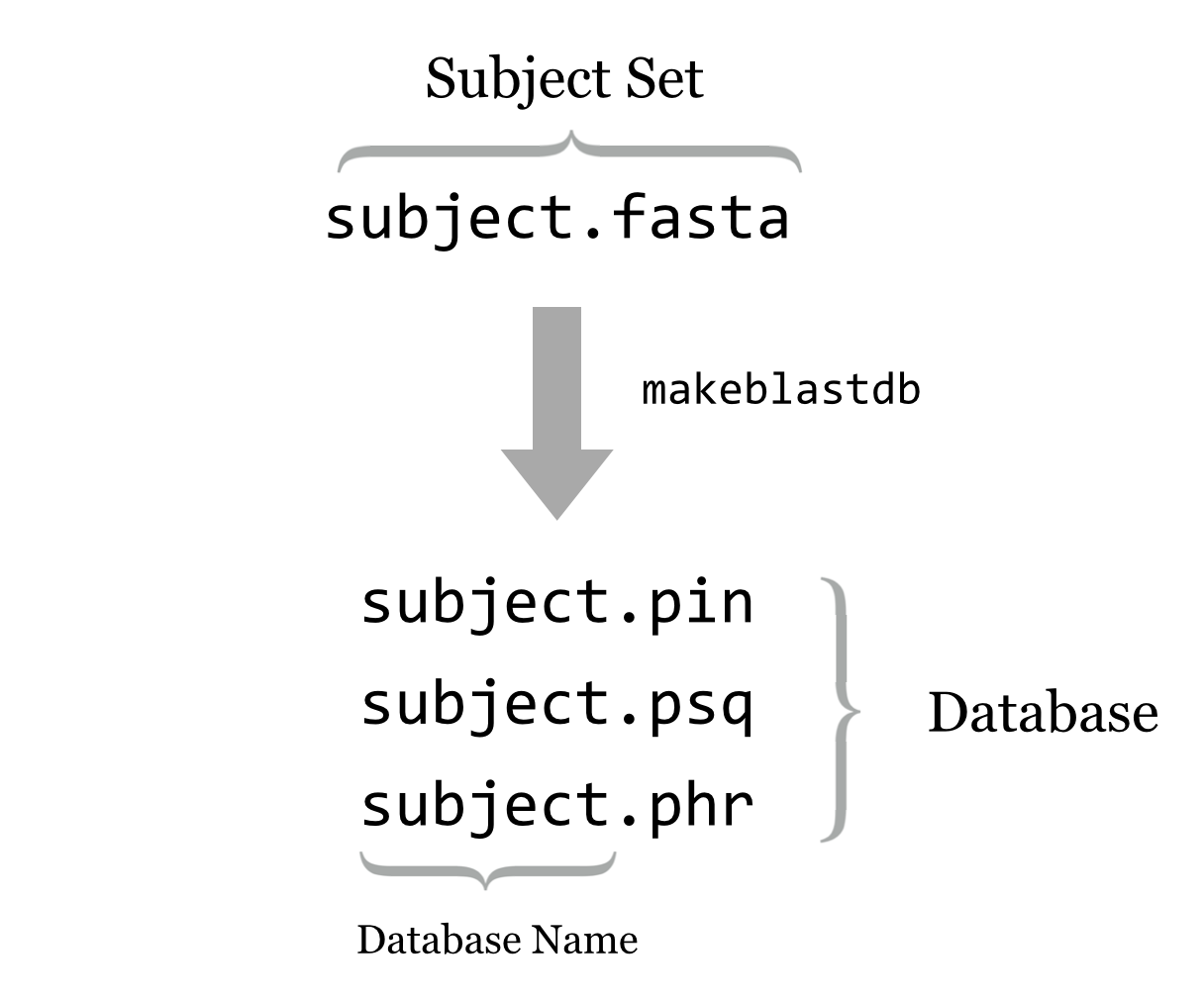 Running makeblastdb on a FASTA file is fairly simple: makeblastdb -in <fasta file> -out <database name> -dbtype <type> -title <title> -parse_seqids, where <type> is one of prot or nucl, and <title> is a human-readable title (enclosed in quotes if necessary). The -parse_seqids flag indicates that the sequence IDs from the FASTA file should be included in the database so that they can be used in outputs as well as by other tools like blastdbcmd (discussed below).

Once a BLAST database has been created, other options can be used with blastn et al.:

When using the -db option, the BLAST tools will search for the database files in three locations: (1) the present working directory, (2) your home directory, and (3) the paths specified in the $BLASTDB environment variable.

To put these various tools and options to use, let’s consider using blastp to look for proteins that are similar in sequence to other proteins in the yeast exome. First, we’ll need to use wget to download the protein data set (after locating it at http://yeastgenome.org), and then gzip -d to decompress it, calling it orf_trans.fasta.

In order to find sequences that are similar to others, we’re going to want to blastp this file against itself. So, we’ll start by creating a database of these sequences.

Now we need to determine what options we will use for the blastp. In particular, do we want to limit the number of HSPs and target sequences reported for each query? Because we’re mostly interested in determining which proteins match others, we probably only need to keep one hit. But each protein’s best hit will likely be to itself! So we’d better keep the top two with -max_target_seqs 2 and only the best HSP per hit with -max_hsps 1. We’ll also use an -evalue 1e-6, a commonly used cutoff.[2]

For the output, we’ll create a tab-separated output with comment lines (-outfmt 7), creating columns for the query sequence ID, subject sequence ID, HSP alignment length, percentage identity of the alignment, subject sequence length, query sequence length, start and end positions in the query and subject, and the E value. (The coded names—qseqid, sseqid, length, etc.—can be found by running blastp -help.) Finally, we’ll call the output file yeast_blastp_yeast_top2.txt and use four processors to speed the computation (which will only really help if the machine we are logged in to has at least that many).

It’s a long command, to be sure! This operation takes several minutes to finish, even with -num_threads 4 specified. When it does finish, we can see with less that the output file contains the columns we specified interspersed with the comment lines provided by -outfmt 7.

In the output snippet above, YAL0005C has an HSP with itself (naturally), but also one with YLL024C. We’ll consider basic analyses containing this sort of data—rows and columns stored in text files, interspersed with extraneous lines—in later chapters.