The phrase “control flow” refers to the fact that constructs like for-loops change the flow of program execution away from the simple top-to-bottom order. There are several other types of control flow we will cover, two of which are “conditional” in nature.

All the lines from the starting if to the last line in an elif: or else: block are part of the same logical construct. Such a construct must have exactly one if conditional block, may have one or more elif blocks (they are optional), and may have exactly one catchall else block at the end (also optional). Each conditional is evaluated in order: the first one that evaluates to True will run, and the rest will be skipped. If an else block is present, it will run if none of the earlier if or elif blocks did as a “last resort.”

Just like with for-loops, if-statements can be nested inside of other blocks, and other blocks can occur inside if-statement blocks. Also just like for-loops, Python uses indentation (standard practice is four spaces per indentation level) to indicate block structure, so you will get an error if you needlessly indent (without a corresponding control flow line like for, if, elif, or else) or forget to indent when an indentation is expected.[1]

The above code would print Number short: 2 number long: 2.

While-loops are less often used (depending on the nature of the programming being done), but they can be invaluable in certain situations and are a basic part of most programming languages. A while-loop executes a block of code so long as a condition remains True. Note that if the condition never becomes False, the block will execute over and over in an “infinite loop.” If the condition is False to begin with, however, the block is skipped entirely.

The above code will print base is: A, then base is: C, and so on, ending with base is: T before finally printing Done. While-loops can thus be used as a type of fine-grained for-loop, to iterate over elements of a string (or list), in turn using simple integer indexes and [] syntax. While the above example adds 1 to base_index on each iteration, it could just as easily add some other number. Adding 3 would cause it to print every third base, for example.

These comparisons work for floats, integers, and even strings and lists. Sorting on strings and lists is done in lexicographic order: an ordering wherein item A is less than item B if the first element of A is less than the first element of B; in the case of a tie, the second element is considered, and so on. If in this process we run out of elements for comparison, that shorter one is smaller. When applied to strings, lexicographic order corresponds to the familiar alphabetical order.

Let’s print the sorted version of a Python list of strings, which does its sorting using the comparisons above. Note that numeric digits are considered to be “less than” alphabetic characters, and uppercase letters come before lowercase letters.

These can be grouped with parentheses, and usually should be to avoid confusion, especially when more than one test follow a not.[2]

Notice the similarity between = and ==, and yet they have dramatically different meanings: the former is the variable assignment operator, while the latter is an equality test. Accidentally using one where the other is meant is an easy way to produce erroneous code. Here count == 1 won’t initialize count to 1; rather, it will return whether it already is 1 (or result in an error if count doesn’t exist as a variable at that point). The reverse mistake is harder to make, as Python does not allow variable assignment in if-statement and while-loop definitions.

In the above, the intent is to determine whether the length of seq is a multiple of 3 (as determined by the result of len(seq)%3 using the modulus operator), but the if-statement in this case should actually be if remainder == 0:. In many languages, the above would be a difficult-to-find bug (remainder would be assigned to 0, and the result would be True anyway!). In Python, the result is an error: SyntaxError: invalid syntax.

Still, a certain class of dangerous comparison is common to nearly every language, Python included: the comparison of two float types for equality or inequality.

While comparing floats with <, >, <=, and >= is usually safe (within extremely small margins of error), comparison of floats with == and != usually indicates a misunderstanding of how floating-point numbers work.[3] In practice, we’d determine if two floating-point values are sufficiently similar, within some defined margin of error.

As an example of using conditional control flow, we’ll consider the file seq.txt, which contains a single DNA string on the first line. We wish to count the number of potential stop codons "TAG", "TAA", or "TGA" that occur in the sequence (on the forward strand only, for this example).

Our strategy will be as follows: First, we’ll need to open the file and read the sequence from the first line. We’ll need to keep a counter of the number of stop codons that we see; this counter will start at zero and we’ll add one to it for each "TAG", "TAA", or "TGA" subsequence we see. To find these three possibilities, we can use a for-loop and string slicing to inspect every 3bp subsequence of the sequence; the 3bp sequence at index 0 of seq occurs at seq[0:3], the one at position 1 occurs at seq[1:4], and so on.

We must be careful not to attempt to read a subsequence that doesn’t occur in the sequence. If seq = "AGAGAT", there are only four possible 3bp sequences, and attempting to select the one starting at index 4, seq[4:7], would result in an error. To make matters worse, string indexing starts at 0, and there are also the peculiarities of the inclusive/exclusive nature of [] slicing and the range() function!

To help out, let’s draw a picture of an example sequence, with various indices and 3bp subsequences we’d like to look at annotated. 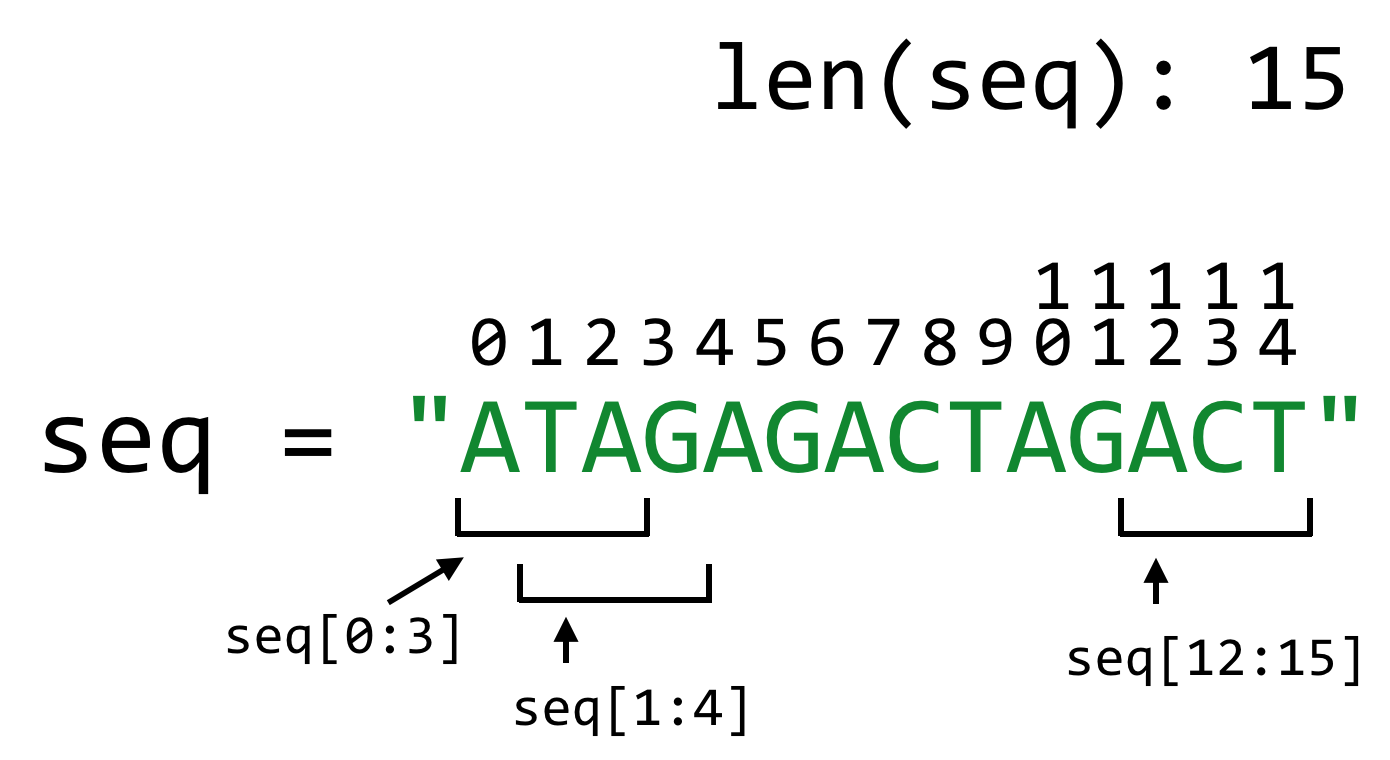 Given a starting index index, the 3bp subsequence is defined as seq[index:index + 3]. For the sequence above, len(seq) would return 15. The first start index we are interested in is 0, while the last start index we want to include is 12, or len(seq) - 3. If we were to use the range() function to return a list of start sequences we are interested in, we would use range(0, len(seq) - 3 + 1), where the + 1 accounts for the fact that range() includes the first index, but is exclusive in the last index.[4]

We should also remember to run .strip() on the read sequence, as we don’t want the inclusion of any \n newline characters messing up the correct computation of the sequence length!

Notice in the code below (which can be found in the file stop_count_seq.py) the commented-out line #print(codon).

While coding, we used this line to print each codon to be sure that 3bp subsequences were reliably being considered, especially the first and last in seq1.txt (ATA and AAT). This is an important part of the debugging process because it is easy to make small “off-by-one” errors with this type of code. When satisfied with the solution, we simply commented out the print statement.

For windowing tasks like this, it can occasionally be easier to access the indices with a while-loop.