Dictionaries (often called “hash tables” in other languages) are an efficient and incredibly useful way to associate data with other data. Consider a list, which associates each data element in the list with an integer starting at zero:

A dictionary works in much the same way, except instead of indices, dictionaries use “keys,” which may be integers or strings.[1] We’ll usually draw dictionaries longwise, and include the keys within the illustrating brackets, because they are as much a part of the dictionary structure as the values:

Let’s create a dictionary holding these keys and values with some code, calling it ids_to_gcs. Note that this name encodes both what the keys and values represent, which can be handy when keeping track of the contents of these structures. To create an empty dictionary, we call the dict() function with no parameters, which returns the empty dictionary. Then, we can assign and retrieve values much like we do with lists, except (1) we’ll be using strings as keys instead of integer indices, and (2) we can assign values to keys even if the key is not already present.

However, we cannot access a value for a key that doesn’t exist. This will result in a KeyError, and the program will halt.

Dictionaries go one way only: given the key, we can look up the value, but given a value, we can’t easily find the corresponding key. Also, the name “dictionary” is a bit misleading, because although real dictionaries are sorted in alphabetical order, Python dictionaries have no intrinsic order. Unlike lists, which are ordered and have a first and last element, Python makes no guarantees about how the key/value pairs are stored internally. Also, each unique key can only be present once in the dictionary and associated with one value, though that value might be something complex like a list, or even another dictionary. Perhaps a better analogy would be a set of labeled shelves, where each label can only be used once. 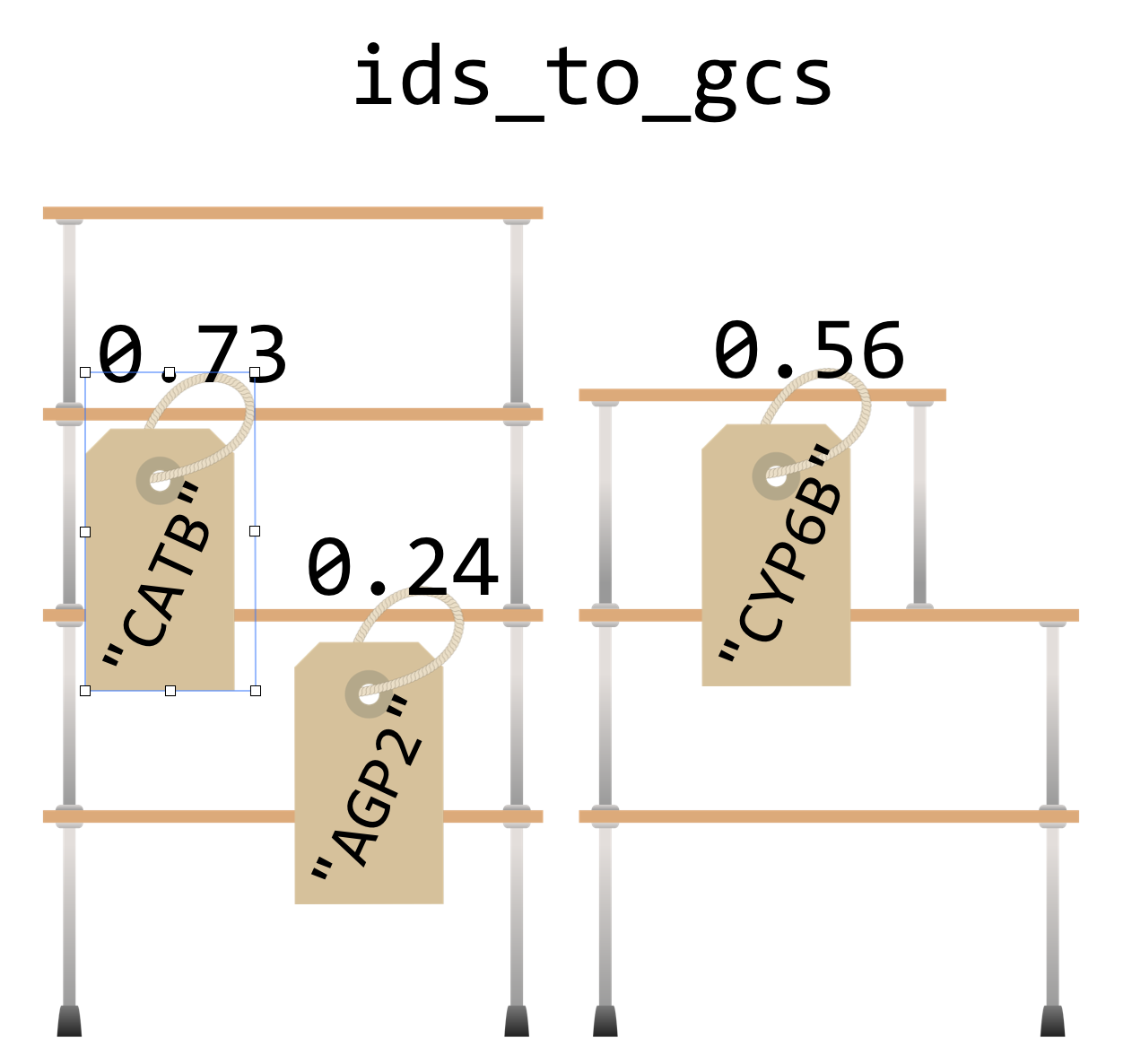 There are a variety of functions and methods that we can use to operate on dictionaries in Python. For example, the len() function will return the number of key/value pairs in a dictionary. For the dictionary above, len(ids_to_gcs) will return 3. If we want, we can get a list of all the keys in a dictionary using its .keys() method, though this list may be in a random order because dictionaries are unordered. We could always sort the list, and loop over that:

Similarly, we can get a list of all the values using .values(), again in no particular order. So, ids_to_gcs.values() will return a list of three floats.[2]

To illustrate the usage of a dictionary in practice, consider the file PZ.annot.txt, the result of annotating a set of assembled transcripts with gene ontology (GO) terms and numbers. Each tab-separated line gives a gene ID, an annotation with a GO number, and a corresponding human-readable term associated with that number.

Our strategy: To practice some of the command line interaction concepts, we’ll have this program read the file on standard input and write its output to standard output (as discussed in chapter 19, “Command Line Interfacing”). We’ll need to keep a dictionary, where the keys are the gene IDs and the values are the counts. A for-loop will do to read in each line, stripping off the ending newline and splitting the result into a list on the tab character, \t. If the ID is in the dictionary, we’ll add one to the value. Because the dictionary will start empty, we will frequently run into IDs that aren’t already present in the dictionary; in these cases we can set the value to 1. Once we have processed the entire input, we can loop over the dictionary printing each count and ID. 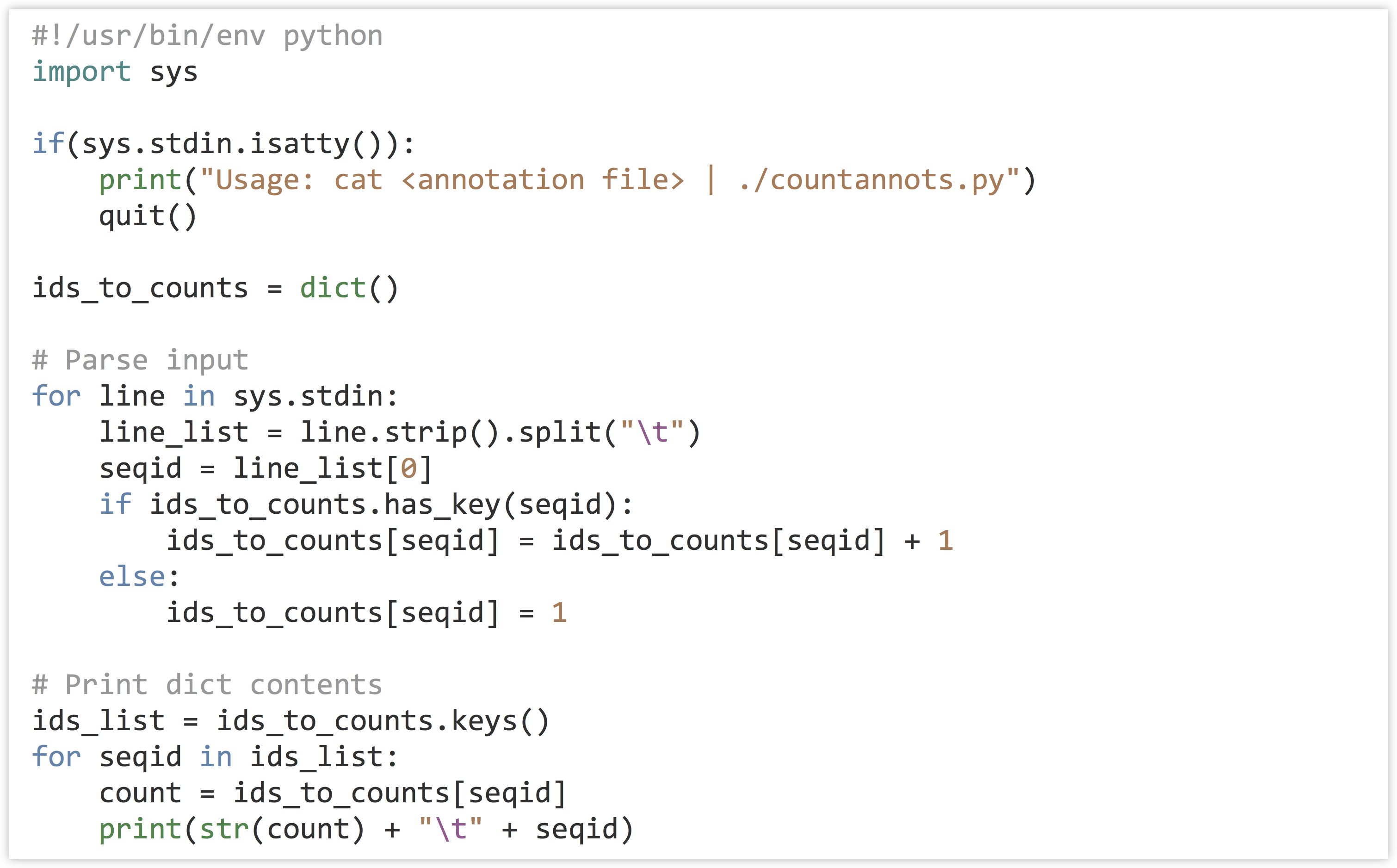 But when the key is not present, we’re simply writing to the value. In the loop that prints the dictionary contents, we are not checking for the presence of each id before reading it to print, because the list of ids_list is guaranteed to contain exactly those keys that are in the dictionary, as it is the result of ids_to_counts.keys().

What’s the advantage of organizing our Python program to read rows and columns on standard input and write rows and columns to standard output? Well, if we know the built-in command line tools well enough, we can utilize them along with our program for other analyses. For example, we can first filter the data with grep to select those lines that match the term transcriptase:

The result is only lines containing the word “transcriptase”:

If we then feed those results through our program (cat PZ.annot.txt | grep 'transcriptase' | ./go_id_count.py), we see only counts for IDs among those lines.

Finally, we could pipe the results through wc to count these lines and determine how many IDs were annotated at least once with that term (21). If we wanted to instead see which eight genes had the most annotations matching “transcriptase,” we could do that, too, by sorting on the counts and using head to print the top eight lines (here we’re breaking up the long command with backslashes, which allow us to continue typing on the next line in the terminal).[4]

It appears gene PZ32722_B has been annotated as a transcriptase seven times. This example illustrates that, as we work and build tools, if we consider how they might interact with other tools (even other pieces of code, like functions), we can increase our efficiency remarkably.

Extracting All Lines Matching a Set of IDs

Another useful property of dictionaries is that the .has_key() method is very efficient. Suppose we had an unordered list of strings, and we wanted to determine whether a particular string occurred in the list. This can be done, but it would require looking at each element (in a for-loop, perhaps) to see if it equaled the one we are searching for. If we instead stored the strings as keys in a dictionary (storing "present", or the number 1, or anything else in the value), we could use the .has_key() method, which takes a single time step (effectively, on average) no matter how many keys are in the dictionary.[5]

Returning to the GO/ID list from the last example, suppose that we had the following problem: we wish to first identify all those genes (rows in the table) that were labeled with GO:0001539 (which we can do easily with grep on the command line), and then we wish to extract all rows from the table matching those IDs to get an idea of what other annotations those genes might have.

In essence, we want to print all entries of a file:

As it turns out, the above problem is common in data analysis (subsetting lines on the basis of an input “query” set), so we’ll be careful to design a program that is not specific to this data set, except that the IDs in question are found in the first column.[6]

We’ll write a program called match_1st_cols.py that takes two inputs: on standard input, it will read a number of lines that have the query IDs we wish to extract, and it will also take a parameter that specifies the file from which matching lines should be printed. For this instance, we would like to be able to execute our program as follows:

In terms of code, the program can first read the input from standard input and create a dictionary that has keys corresponding to each ID that we wish to extract (the values can be anything). Next, the program will loop over the lines of the input file (specified in sys.argv[1]), and for each ID check it with .has_key() against the dictionary created previously; if it’s found, the line is printed. 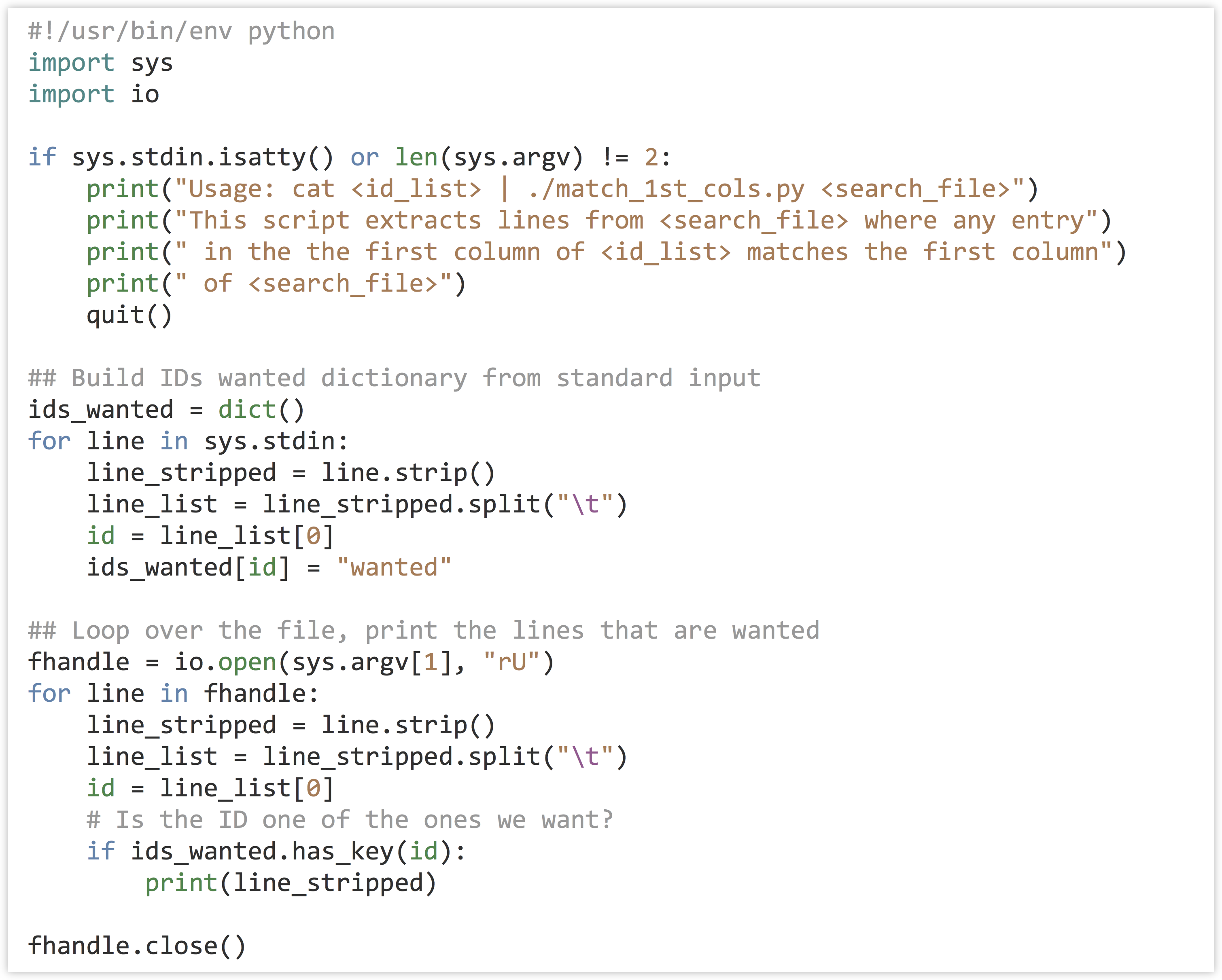 Making the program (match_1st_cols.py) executable and running it reveals all annotations for those IDs that are annotated with GO:0001539.

As before, we can use this strategy to easily extract all the lines matching a variety of criteria, just by modifying one or both inputs. Given any list of gene IDs of interest from a collaborator, for example, we could use that on the standard input and extract the corresponding lines from the GO file.