All organizations have strategies. The real question for a business is not whether it has a strategy but rather whether its strategy is effective or ineffective, and whether the elements of the strategy are chosen by managers, luck, or by default. You have probably heard the saying, “luck is a matter of being in the right place at the right time”—well, the key to making sure you are in the right place at the right time is preparation, and in many ways, strategizing provides that type of preparation. Luck is not a bad thing. The challenge is to recognize luck when you see it, capitalize on luck, and put the organization repeatedly in luck’s path. 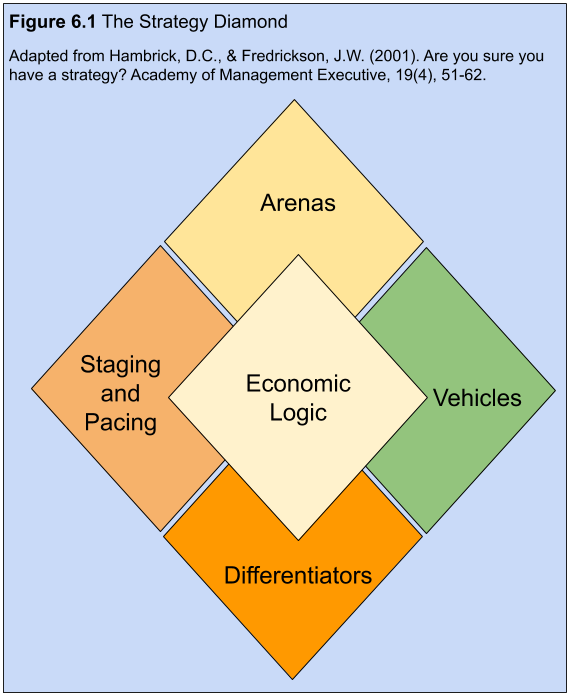 The strategy diamond (Figure 6.1) was developed by strategy researchers Don Hambrick and Jim Fredrickson as a framework for checking and communicating a strategy.[1] Unit 5 discussed the need for focus and choice with strategy, but you might also have noticed that generic strategies and value disciplines do not spell out a strategy’s ingredients. In critiquing the field of strategy, these researchers noted that “after more than 30 years of hard thinking about strategy, consultants and scholars have provided executives with an abundance of frameworks for analyzing strategic situations. Missing, however, has been any guidance as to what the product of these tools should be—or what actually constitutes a strategy.”

Because of their critique and analysis, they concluded that if an organization must have a strategy, then the strategy must necessarily have parts. Figure 6.1 identifies the parts of their diamond model. The diamond model does not presuppose that any particular theory should dictate the contents of each facet. Instead, a strategy consists of an integrated set of choices, but it isn’t a catchall for every important choice a manager faces. In this section, we will tell you a bit about each facet, addressing first the traditional strategy facets of arenas, differentiators, and economic logic; then we will discuss vehicles and finally the staging and pacing facet.

We refer to the first three facets of the strategy diamond—arenas, differentiators, and economic logic—as traditional in the sense that they address three longstanding hallmarks of strategizing. Specifically, strategy matches up market needs and opportunities (located in arenas) with unique features of the firm (shown by its differentiators) to yield positive performance (economic logic). While performance is typically viewed in financial terms, it can have social or environmental components as well.

Strategy questions about arenas tell managers and employees where the firm will be active and with how much emphasis.

Starting October 2019, NBA teams were allowed to sign up two advertising sponsors outside the U.S. and Canada, which was prohibited before. Previously, teams were restricted outside of the markets where they normally play home games. For example, the league didn’t want the Celtics (a Boston based team) to go to Hollywood CA (a Laker’s market) to promote their brand. This development goes beyond the domestic market and further expands the NBA’s arena into the global market and thereby creating new international opportunities.

These are the things that are unique to the firm such that they give it a competitive advantage in its current and future arenas. Differentiators are concerned with the question, how will the firm win?

A differentiator could be asset based, that is, it could be something related to an organization’s tangible or intangible assets. A tangible asset has a value and physically exists. Land, machines, equipment, automobiles, and even currencies, are examples of tangible assets. For instance, the oceanfront land on California’s Monterey Peninsula, where the Pebble Beach Golf Course and Resort is located, is a differentiator for it in the premium golf-course market. An intangible asset is a nonphysical resource that provides gainful advantages in the marketplace. Brands, copyrights, software, logos, patents, goodwill, and other intangible factors afford name recognition for products and services. Differentiators can also be found in capabilities, that is, how the organization does something. Walmart, for instance, is very good at keeping its costs low.

Samsung recently launched its second try on a compelling foldable device, Galaxy Z Flip, which could create a vast differentiation with its fierce rival, Apple. The new product can be folded and fits into a much smaller pocket while still sporting a large 6.7″ screen. This differentiator has the potential of convincing some loyal Apple consumers to consider switching to the Galaxy Z Flip due to this attractive feature.

This explains how the firm makes money above its cost of capital.

While economic logic can include environmental and social profits (benefits reaped by society), the strategy must earn enough financial profits to keep investors (owners, taxpayers, governments, and so on) willing to continue to fund the organization’s costs of doing business. A firm performs well (i.e., has a strong, positive economic logic) when its differentiators are well-aligned with its chosen arenas.

Saudi Arabia drastically dropped its official crude oil selling prices and announced an production output hike after Russia’s rejection of cutting output. The whiplash effect has affected the international market, including the U.S. and Canada, along with the global economy which has been dramatically reduced due to the Covid-19 pandemic. According to the IEA, about 5% of global oil production is losing money due this low market price. However, Saudi Arabia might still win in the price war because it has a lowest production cost advantage.

You can see why the first three facets of the strategy diamond—arenas, differentiators, and economic logic—might be considered the traditional facets of strategizing in that they cover the basics: (1) external environment, (2) internal organizational characteristics, and (3) some fit between them that has positive performance consequences. The fourth facet of the strategy diamond is called vehicles. If arenas and differentiators show where you want to go, then vehicles communicate how the strategy will get you there.

Toyota and Mazda have established a new joint venture company. The companies will jointly open an assembly plant in Alabama, each company will contribute equal funding (50/50 joint venture). Because of the need to adapt quickly to market conditions, Toyota and Mazda want to increase plant flexibility. The new plant in Alabama can produce 300,000 vehicles per year; Mazda plans to produce 150,000 crossover models and Toyota will manufacture 150,000 Toyota Corollas. Both models will share drivetrains. The collaboration is expected to help the companies reduce their cost of manufacturing and maintain sustainable growth in “the future of mobility.”

Specifically, vehicles refer to how you might pursue a new arena through internal means, through help from a new partner or some other outside source, or even through acquisition. In the context of vehicles, this is where you determine whether your organization is going to grow organically, through acquisition, or a combination of both. Organic growth is the growth rate of a company excluding any growth from takeovers, acquisitions, or mergers. Acquisitive growth, in contrast, refers precisely to any growth from takeovers, acquisitions, or mergers.

Coopetition will be the leading force for innovation in the future business space. Daimler and BMW are collaborating for a 1.1 billion dollar partnership into the rideshare and vehicle innovation space to contend with Uber. The partnership intends on creating five different companies to innovate the future of the vehicle market while capitalizing on each company’s core competencies.

Source: LABS, Next wave of innovation will come from coopetition, 2020Wi

Vehicles are considered part of the strategy because there are different skills and competencies associated with different vehicles. For instance, acquisitions fuel rapid growth, but they are challenging to negotiate and put into place. Similarly, alliances are a great way to spread the risk and let each partner focus on what it does best. But at the same time, to grow through alliances also means that you must be really good at managing relationships in which you are dependent on another organization over which you do not have direct control. Organic growth, particularly for firms that have grown primarily through partnering or acquisition, has its own distinct challenges, such as the fact that the organization is on its own to put together everything it needs to fuel its growth.

LVMH acquired Tiffany & Co at the price of $16.2 billion. LVMH is a conglomerate that owns world famous luxury brands such as Louis Vuitton and Givenchy. Its effort to acquire Tiffany is intended to complete LVMH’s high-end jewelry industry portfolio. However, due to COVID-19, the acquisition process may be delayed by half a year. Additionally, full approval has been, or is in the process of being, gained from several national foregin investment review boards.

Staging and pacing constitute the fifth and final facet of the strategy diamond and answer what will be our speed and sequence of moves?

Staging and pacing reflect the sequence and speed of strategic moves. This powerful facet of strategizing helps you think about timing and next steps, instead of creating a strategy that is a static, monolithic plan. Remember, strategizing is about making choices, and sequencing and speed should be key choices along with the other facets of the strategy. The staging and pacing facet also helps to reconcile the designed and emergent portions of your strategy.

Due to the coronavirus pandemic, people have been restricted from going outside. At this point, many physical stores are closed; however, online sales of ramen has spiked on Walmart Inc.’s website by almost 600%. Other shelf-stable staples are also seeing large increases in demand online. Seeing an opportunity in this crisis, Walmart is addressing what it calls “restricted living”. Meanwhile, homebound consumers are stocking up on easy-stored food and medical / health supplies to prepare for being stuck indoors for a long time.