The best-laid plans of mice and men often go awry.

This quote from English poet Robert Burns is especially applicable to strategy. While we have been discussing strategy and strategizing as if they were the outcome of a rational, predictable, analytical process, your own experience should tell you that a fine plan does not guarantee a fine outcome. Many things can happen between the development of the plan and its realization, including (but not limited to): (1) the plan is poorly constructed, (2) competitors undermine the advantages envisioned by the plan, or (3) the plan was good but poorly executed. You can probably imagine a number of other factors that might undermine a strategic plan and the results that follow. 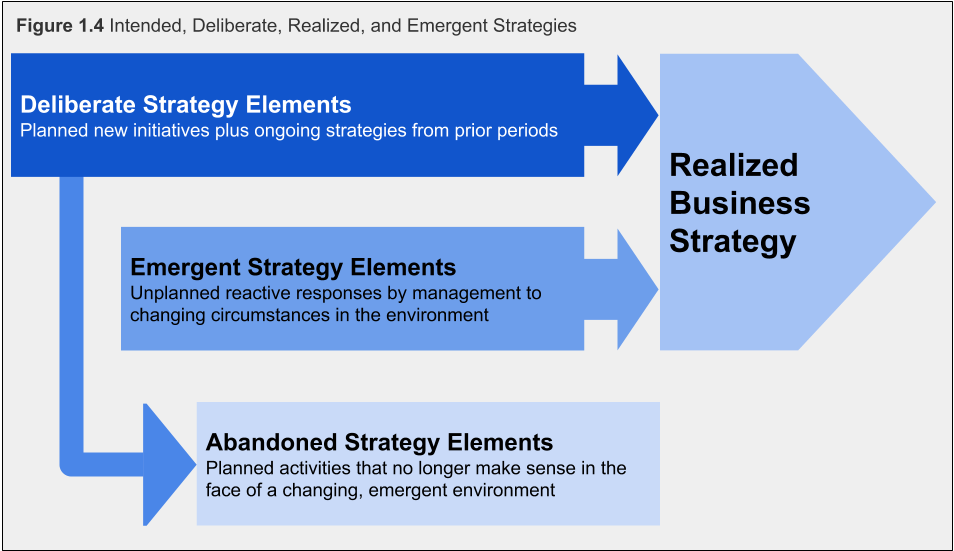 The ways in which organizations make strategy has emerged as an area of intense debate within the strategy field. Henry Mintzberg and his colleagues at McGill University distinguish intended, deliberate, realized, and emergent strategies.[1] These four different aspects of strategy are summarized in Figure 1.4. Intended strategy is strategy as conceived by the top management team. Even here, rationality is limited and the intended strategy is the result of a process of negotiation, bargaining, and compromise, involving many individuals and groups within the organization. However, realized strategy—the actual strategy that is implemented—is only partly related to that which was intended (Mintzberg suggests only 10%–30% of intended strategy is realized).

Evergrande Group’s plans to cut debt and remake the company to be leaner by focusing on controlled growth was met with skepticism by analysts. Evergrande had become China’s most indebted developer with its debt having grown to 159% of assets in late 2019. The firm vows its new strategy will reduce debt load by 50% and increase sales, planning to cut interest-bearing debt by 150 billion yuan per year for the next three years. It plans to accomplish this by reducing its aggressive expansion plans and looking for more profitable lines of revenue including electric vehicles. The environment is challenging in light of economic fallout from the Covid-19 pandemic. Evergrande points out it has never defaulted on a bond. The skeptics worry the firm’s margins will suffer at the expense of volume.

The primary determinant of realized strategy is what Mintzberg terms emergent strategy—the decisions that emerge from the complex processes in which individual managers interpret the intended strategy and adapt to changing external circumstances.[2] Thus, the realized strategy is a consequence of deliberate and emerging factors.

Although the debate between the two schools continues,[3] we hope that it is apparent that the central issue is not, “Which school is right?” but, “How can the two views complement one another to give us a richer understanding of strategy making?” Let us explore these complementarities in relation to the factual question of how strategies are made and the normative question of how strategies should be made.

The Making of Strategy

How Is Strategy Made?

Robert Grant, author of Contemporary Strategy Analysis, shares his view on how strategy is made as follows.[4] For most organizations, strategy making combines design and emergence. The deliberate design of strategy (through formal processes such as board meetings and strategic planning) has been characterized as a primarily top-down process. Emergence has been viewed as the result of multiple decisions at many levels, particularly within middle management, and has been viewed as a bottom-up process. These processes may interact in interesting ways.

Chinese New Year is a major holiday in China and provides a huge revenue boost for businesses, especially in the movie industry. The Coronavirus pandemic that started in late 2019 forced the closing of theaters and interrupted the premiere of all major motion pictures in China. Huanxi Media Group, maker of Lost in Russia, was facing the loss of tens of millions of dollars of revenue as a result. Instead, they pivoted from on-screen to online with a new partner, ByteDance, the global multimedia giant responsible for TikTok and other properties. The agreement, worth $91 million and a share of the advertising revenues, was closed in 24-hours and Lost in Russia was released on ByteDance’s platforms on Chinese New Years Eve. The movie racked up an astonishing 600 million views in its first two days. Not only did the movie gain a huge following, provide a new distribution channel for Huanxi, and a surge of new users for ByteDance, it also provided Chinese citizens with much needed entertainment during the outbreak; a new collaboration between the two companies is already in the works.

In practice, both design and emergence occur at all levels of the organization. The strategic planning systems of large companies involve top management passing directives and guidelines down the organization and the businesses passing their draft plans up to corporate. Similarly, emergence occurs throughout the organization—opportunism by CEOs is probably the single most important reason why realized strategies deviate from intended strategies. What we can say for sure is that the role of emergence relative to design increases as the business environment becomes increasingly volatile and unpredictable.

Organizations that inhabit relatively stable environments—the Roman Catholic Church and national postal services—can plan their strategies in some detail. Organizations whose environments cannot be forecasted with any degree of certainty—a gang of car thieves or a construction company located in the Gaza Strip—can establish only a few strategic principles and guidelines; the rest must emerge as circumstances unfold.

Mintzberg’s advocacy of strategy making as an iterative process involving experimentation and feedback is not necessarily an argument against the rational, systematic design of strategy. The critical issues are, first, determining the balance of design and emergence and, second, how to guide the process of emergence. The strategic planning systems of most companies involve a combination of design and emergence. Thus, headquarters sets guidelines in the form of vision and mission statements, business principles, performance targets, and capital expenditure budgets. However, within the strategic plans that are decided, divisional and business unit managers have considerable freedom to adjust, adapt, and experiment.