This chapter provides an introduction and discussion of proteins and amino acids that are important in the nutrition of food-producing animals.

The word proteins was coined by a Dutch chemist G. J. Mulder and originated from the Greek word “proteios”, meaning first or most important. Proteins are organic compounds made up of different building blocks (basic units) called amino acids joined together by peptide bonds (Figure 9.1). A dipeptide contains one peptide bond and two amino acids, whereas a tripeptide contains three amino acids and two peptide bonds. A peptide with more than ten amino acids is called a polypeptide. Proteins are essentially large polypeptides. The structure of a protein is determined first by the sequence of individual amino acids it has in the polypeptide chain. This is also called the primary structure of the protein.

Protein requirements vary with life stages and are high during phases of fast growth in young animals and during pregnancy and lactation. Like other macronutrients, proteins contain carbon, oxygen, and hydrogen. In addition, proteins also contain nitrogen and sulfur (in some amino acids). It is the nitrogen that makes proteins very unique in animal nutrition with respect to its digestibility, metabolism, and disposal within the animal body.

Proteins can be classified based on their shape; solubility in water, salt, acid, base, or alcohol; or according to the nature of the prosthetic group.

Classification Based on Solubility and Prosthetic Group

These proteins have limited nutritional value but are important in biochemical, structural, and other metabolic functions. For example, feather meal is high in protein (keratin) but very low in digestibility and is of limited use in animal nutrition as a feed ingredient. Amino acids in the polypeptide chain in feather meal form disulfide bonds (-S-S-), which twist the polypeptide chain into a specific coiled structure such as helix or sheet. This is called a secondary structure. These bonds account for the tough physical properties of hooves and horns and their low digestibility.

Amino Acids: Amino acids are the building blocks of proteins. There are more than 300 different amino acids known to exist in nature. Out of these, about 20 amino acids are important constituents of animal proteins and are associated with muscles, connective tissues, skin, feathers, horns, blood, enzymes, and hormones. There about 10 amino acids that should be present in the diet of animals because animal tissues cannot synthesize them or cannot make the adequate amount needed for metabolic functions; these are called essential amino acids. A few other amino acids such as citrulline and ornithine do not occur in animal tissues but are involved in cellular metabolic functions.

Amino acids are the building blocks of proteins.
Essential amino acids must be supplied through the diet.
Animals cannot synthesize them or cannot make the adequate amount needed.

All amino acids by definition contain at least one amino group (-NH2) and one carboxyl group (–COOH) on the C atom adjacent to the carboxyl group (Figure 9.2). An exception to this is proline (imino acid), which is lacking a free amino group. The general structure of an amino acid is shown below by the amino acid glycine, the simplest of the amino acids (Figure 9.2). The R group (shown in the red circle) in amino acids varies for different amino acids. The R group is the remainder of the molecule or any other group attached to the C atom. In the case of glycine, it is an H group. The amino group (NH2) provides basic properties to the amino acid, and the carboxyl (COOH) group provides acidic properties. Amino acids important in animal nutrition are alpha (α) amino acids, which are carboxylic acids with an amino group on the α-carbon (or the first carbon attached to a functional group). A list of amino acids important in animal nutrition, their essentiality and classification are shown in Table 9.1. 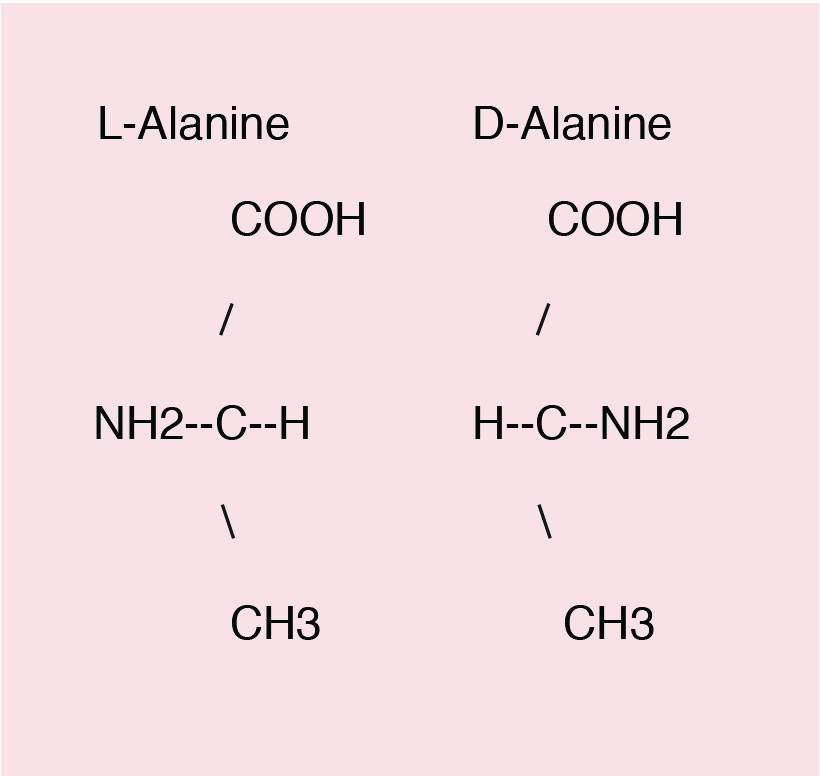 All amino acids except glycine contain an asymmetric α-carbon (with four different chemical groups attached to it). Compounds with asymmetric carbons can exist as isomers.

List of Essential Amino Acids and Their Common Abbreviations

A Guide to the Principles of Animal Nutrition by Gita Cherian is licensed under a Creative Commons Attribution-NonCommercial 4.0 International License, except where otherwise noted.