This chapter provides an introduction and discussion of lipids (fats) that are important in the nutrition of food-producing animals. After carbohydrates, lipids serve as a major source of energy in animal diets.

Lipids (also known as fats) are components of plant (e.g., vegetable oils) and animal tissues (e.g., meat, eggs, milk). On a physical nature, lipids are relatively insoluble in water and are soluble in organic solvents, such as hexane, ether, and chloroform.

Chemically, lipids are organic compounds and esters of fatty acids and glycerol (a 3 C compound) or some other alcohol.

Fats are the primary storage form of energy (e.g., oil in seed) and serve as an animal’s body’s “savings account.” For example, the abdominal fat pads in chicken and back fat in pigs are mostly triglycerides.

Simple lipids like triglycerides are more common and are an important component in animal rations (e.g., vegetable oil and animal fats such as tallow or lard).
Compound lipids are composed of a lipid plus a nonlipid molecule (e.g., protein). Lipoprotein (lipid + protein) are examples of compound lipids and are used for lipid transport (like a courier). Within the animal body, compound lipids are more important in physiology and metabolism (e.g., lipid transport, phospholipids as part of cell membranes).
As implied by their name, derived lipids originate from simple or compound lipids through hydrolytic processes. Examples of derived lipids include sterols, fatty acids, and fat-soluble vitamins.

Why Add Fats to Animal Diets?

Nutritionally, fats are excellent sources of energy and are essential to the survival of animals. Fats are the sole source of essential fatty acids (those that cannot be made by the body) for animals. Fats can also provide fat-soluble vitamins. However, this role is very minimal in livestock as feeds are supplemented with vitamins.

The most important role of dietary fat is to provide essential fatty acids.
As the fat content of the diet increases, the energy density of the diet goes up.

Fatty Acids: What Are They?

Fatty acids are the main players in lipid nutrition. This is due to their diversity in structure, composition, and metabolizability. The molecular composition of a fatty acid includes a hydrophilic carboxyl group (−COOH) and a hydrophobic methyl group (−CH3) at opposite terminals of a hydrocarbon backbone (see Figure 6.1).

A schematic representation of a triacylglycerol structure with three fatty acids on a glycerol backbone is shown below. 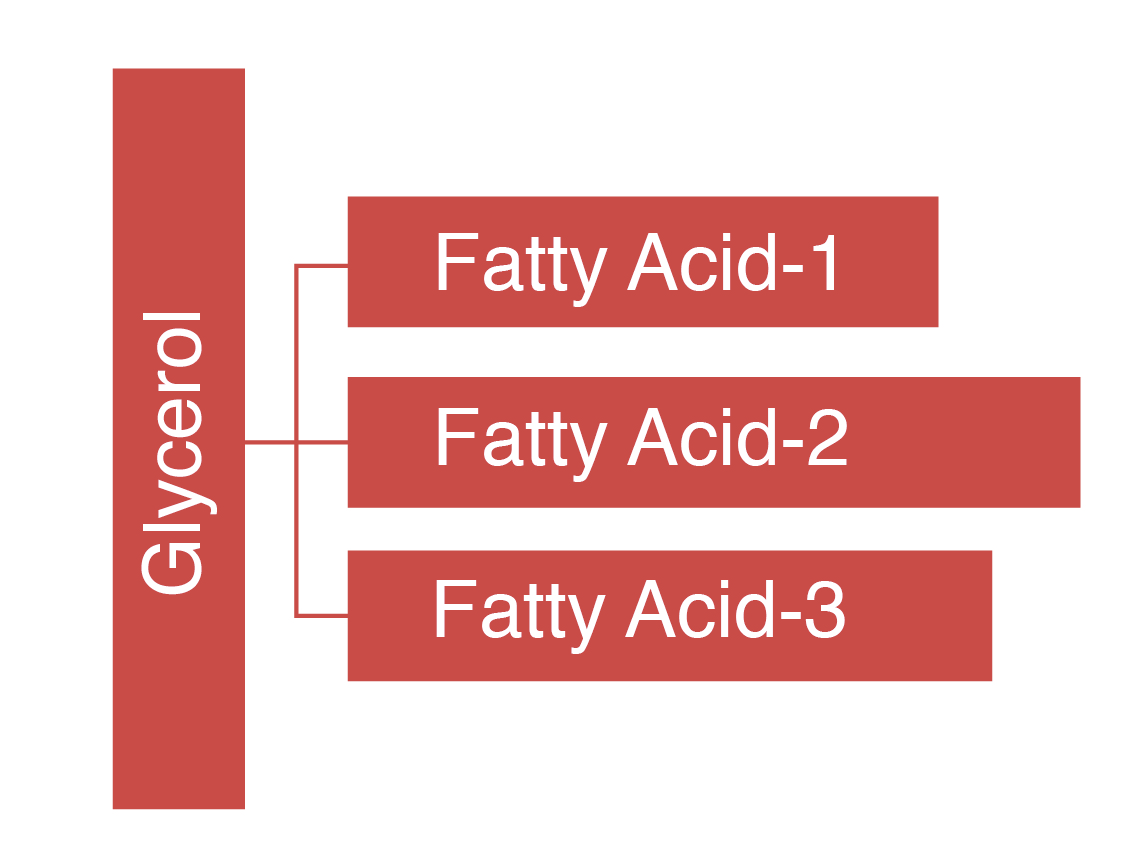 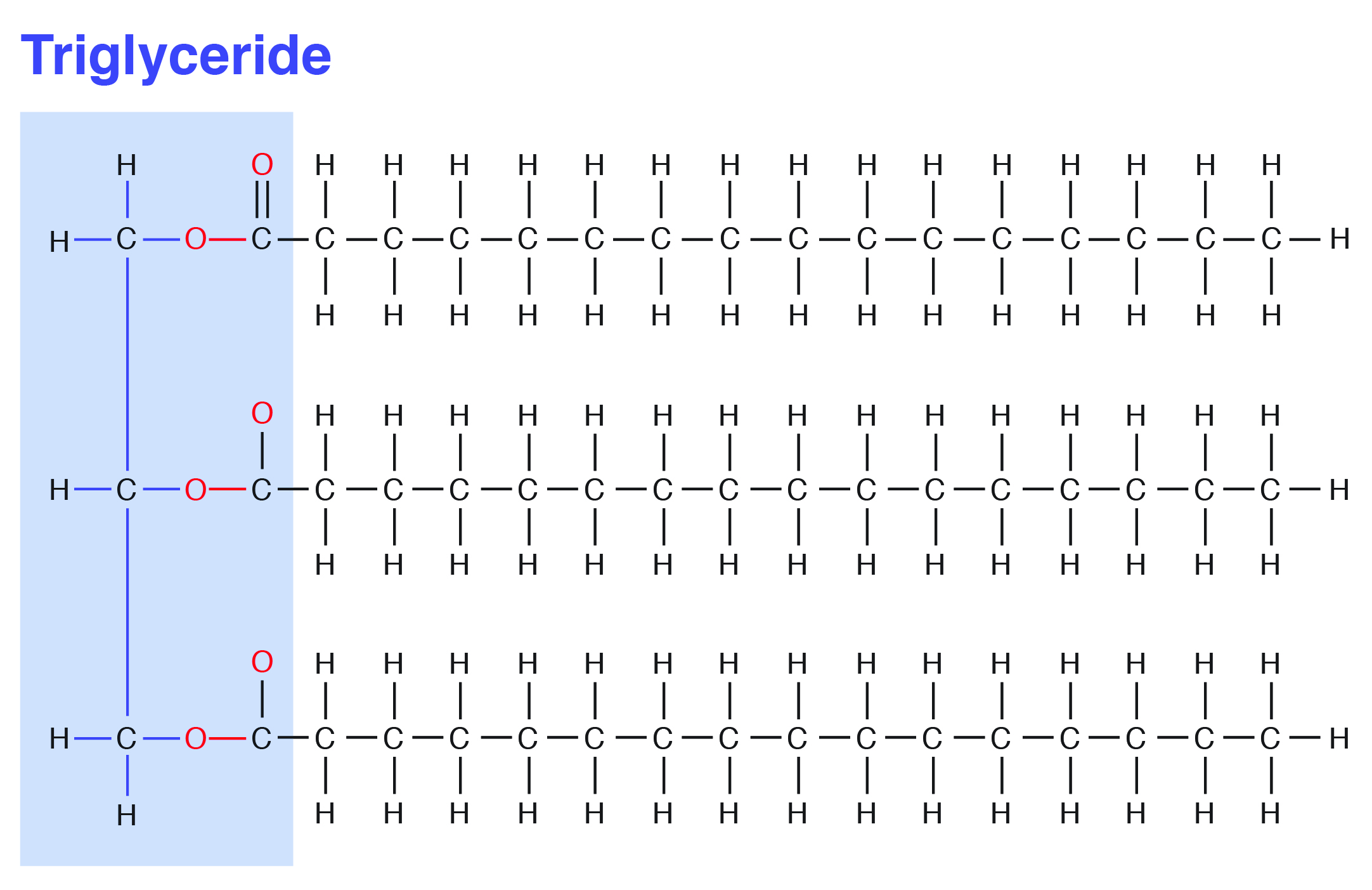 Saturated fatty acids are “saturated” with hydrogen or straight chains with no double bonds (e.g., palmitic acid, C16:0). When there is a predominance of saturated fats in the glycerol moiety, the triacylglycerol tends to be solid. This is because due to their straight chain nature, they tend to “pack” very tightly in the membrane (e.g., tallow or beef fat; Figure 6.2).

In nonruminant, or monogastric, animals such as pigs, two fatty acids (α-linolenic acid, C18:3 n-3) and linoleic acid (C18:2 n-6) have to be supplied in the diet and are called essential fatty acids. This essentiality is due to the inability to insert double bonds at the third and sixth carbon from CH3 end in n-3 and n-6 locations. In addition to these two essential fatty acids, carnivores such as cats need arachidonic acid (C20:4 n-6) in their diets.

In nutrition, the term “essential” means animals cannot synthesize it to meet their requirements. Essential fatty acids include the following:

Unsaturated fatty acids can form geometric isomers, with either cis or trans, depending on the stereo-conformation of groups around a double bond. Most natural fatty acids of animal and plant origin are of the cis type, whereas those of bacterial origin contain both cis and trans types.

For example, conjugated linoleic acid (CLA) is a trans fatty acid present in cow’s milk or other ruminant food like beef and is  produced by rumen microbes during the biohydrogenation process. In CLA, the two double bonds lack a methylene group separating them, have a conjugated arrangement, and are called natural trans fats. Trans fats such as CLA have received considerable attention due to their several health-promoting (e.g., anticancer, immune health enhancing, lean body mass enhancing) effects. There are other trans fats that are produced during the hydrogenation process (the addition of hydrogen) when liquid vegetable oil is made into solid fats such as margarine. These are synthetic trans fats and have different health effects when compared with “natural” trans fats such as CLA.

Sterols (lipids with phenanthrene ring–like structures) are the most abundant steroid in the human diet. Cholesterol is the best known steroid (fat-soluble substance containing a steroid nucleus) and is the precursor of many other substances such as vitamin D, bile acids, sex hormones, and corticosteroid hormones. 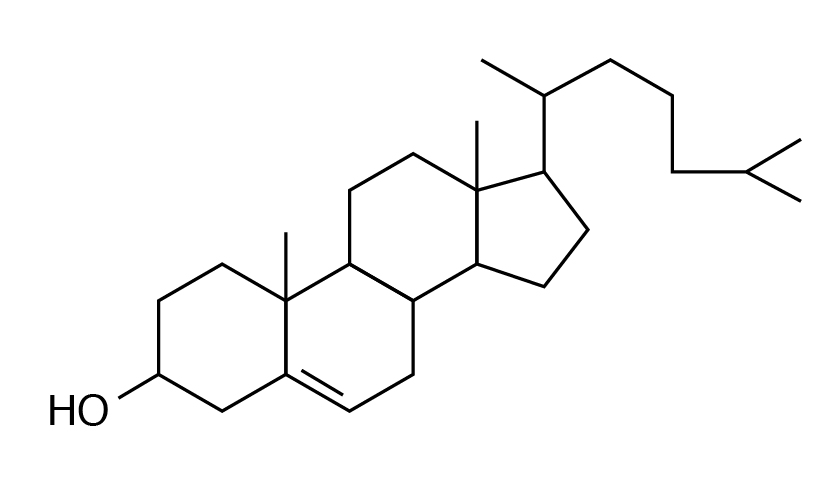 An important component of animal tissues, egg yolks, and cell membranes, cholesterol synthesis is partly by dietary intake and partly by biosynthesis from acetyl CoA. Excess cholesterol is stored in arteries and can lead to atherosclerotic plaque formation and cardiovascular disorders. Excretion of cholesterol is through bile acid formation. Plant cells do not contain cholesterol but instead contain other sterols called phytosterols.

A Guide to the Principles of Animal Nutrition by Gita Cherian is licensed under a Creative Commons Attribution-NonCommercial 4.0 International License, except where otherwise noted.