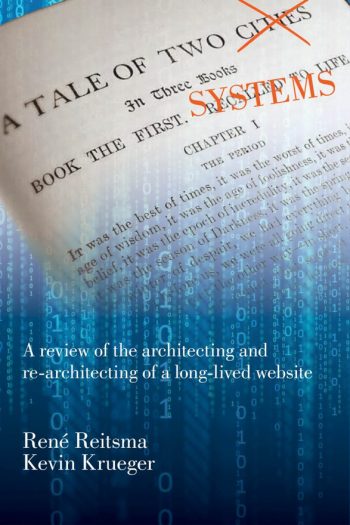 Book Description: This text is meant as a case study and companion text to many Systems Analysis & Design textbooks used in undergraduate Management Information Systems (MIS), Business Information Systems (BIS) and Computer Information Systems (CIS) programs. The US counts about 1,300 (undergraduate + graduate) such programs (Mandiwalla et al., 2016). These texts typically contain short descriptions of technologies which give students some sense of what these technologies are used for, but do not provide much context or reflection on why these technologies might or might not be applied and what such applications actually amount to in real life. As a consequence, students, having worked their way through these textbooks and associated courses will have had little exposure to the reasoning which must take place when making choices between these technologies and to what goes into combining them into working and successful system architectures. It is our hope that this Tale of Two Systems (pun very much intended) will help mitigate this problem a little.

This is the story of a web-based information system rebuild. The system in question is www.teachengineering.org, a digital library of K-12 engineering curriculum that was built from the ground up with established technology and which for 13 years enjoyed lasting support from its growing user community and its sponsors. These 13 years, however, cover the period during which smart phones and tablets became commonplace, during which the Internet of Things started replacing the Semantic Web, during which NoSQL databases made their way out of the research labs and into everyday development shops, during which we collectively started moving IT functions and services into ‘the cloud,’ and during which computing performance doubled a few times, yet again. During this same period, TeachEngineering’s user base grew from a few hundred to more than 3 million users annually, its collection size quadrupled, it went through several user interface renewals, and significant functionality was added while having an exemplary service record, and it enjoyed continued financial support from its sponsors.

Yet, although the system architecture could probably have survived a while longer, it started to become clear that with the newer technologies, better and newer services could be developed faster and at lower cost, that moving most of its functionality into the cloud would both boost performance and lower maintenance cost, and that the system’s resource and code footprint could be significantly reduced by rebuilding it on a different architecture, with different and more modern technology.

In this monograph we provide a side-by-side of this rebuild. We lay out the choices made in the old architecture —we refer to it as TE 1.0— and compare and contrast them with the choices made for TE 2.0. We explain why both the 1.0 and 2.0 choices were made and discuss the advantages and disadvantages associated with them.

A Tale of Two Systems by René Reitsma and Kevin Krueger is licensed under a Creative Commons Attribution-NonCommercial-ShareAlike 4.0 International License, except where otherwise noted.

A Tale of Two Systems by René Reitsma and Kevin Krueger is licensed under a Creative Commons Attribution-NonCommercial-ShareAlike 4.0 International License, except where otherwise noted.

Publication and ongoing maintenance of this textbook is possible due to grant support from Oregon State University Ecampus.