Conditions on early Earth were most likely extremely hot, anoxic (lacking oxygen), with reduced inorganic chemicals in abundance. While no one knows exactly how cells came about, it is likely that they were initially suited to these harsh conditions.

RNA, in its many forms, plays a crucial role in cellular activities. It has been hypothesized that RNA played an even more central role in primitive cells, with self-replicating RNA containing a cell’s information as well as having catalytic activity to synthesize proteins. Eventually this RNA world evolved to one in which proteins took over the catalytic responsibilities and DNA became the common form of information storage.

Initial cells probably had a relatively primitive electron transference system, perhaps through just one carrier, that still allowed for the development of a proton motive force to conserve energy. As chemolithoautotrophs proliferated, organic material started to accumulate in the environment, providing the conditions needed for the development of chemoorganotrophic organisms. These new cells oxidized organic compounds, with their more negative redox potential and increased number of electrons. This most likely lengthened electron transport chains, resulting in faster growth, and speeding up diversity even more.

At about 3.5 billion year ago some cells evolved phototrophic pigments, allowing for the conversion of light energy into chemical energy. Initially phototrophs utilized anoxygenic phototrophy, using sulfur products as an electron donor when performing CO2 fixation.

Stromatolites are layered rocks that form when minerals are incorporated into thick mats of microbes, growing on water surfaces. Ancient stromatolites contain fossilized microbial mats made up of cyanobacteria-like cells, indicating their presence relatively early in Earth’s history.

Approximately 2.5-3.3 billion year ago the cyanobacterial ancestors developed oxygenic photosynthesis by acquiring two photosystems and the pigment chlorophyll a. This led to the use of water as an electron donor, causing oxygen to accumulate in Earth’s atmosphere. This Great Oxidation Event substantially changed the types of metabolism possible, allowing for the use of oxygen as a final electron acceptor.

The development of an ozone shield around the Earth occurred around 2 billion years ago. Ozone (O3) serves to block out much of the ultraviolet (UV) radiation coming from the sun, which can cause significant damage to DNA. As oxygen accumulated in the environment, the O2 was converted to O3 when exposed to UV light, causing an ozone layer to form around Earth. This allowed organisms to start inhabiting the surface of the planet, as opposed to just the ocean depths or soil layers.

Evolution supports the idea of more primitive molecules or organisms being generated first, followed by the more complex components or organisms over time. Endosymbiosis offers an explanation for the development of eukaryotic cells, a more complex cell type with organelles or membrane-bound enclosures.

It is generally accepted that eukaryotic ancestors arose when a cell ingested another cell, a free-living bacterium, but did not digest it. This endosymbiont had capabilities that the proto-eukaryotic cell lacked, such as the ability for phototrophy (i.e. chloroplasts) or oxidative phosphorylation (i.e. mitochondria). Eventually the two became mutually dependent upon one another with the endosymbiont becoming an organelle, with the chloroplast being derived from a cyanobacterial ancestor and the mitochondrion being derived from a gram negative bacillus ancestor.

Evidence to support this idea includes the fact that mitochondria and chloroplasts: have a single, circular chromosome; undergo binary fission separate from the eukaryotic cell; have 70S sized ribosomes; have a lipid bilayer with a 2:1 ratio of protein to lipid; and, perhaps most importantly, have rRNA sequences that place them phylogenetically with the bacteria.

Phylogeny is a reference to the development of an organism evolutionarily. Molecular techniques allow for the evolutionary assessment of organisms using genomes or ribosomal RNA (rRNA) nucleotide sequences, generally believed to provide the most accurate information about the relatedness of microbes.

Nucleic acid hybridization or DNA-DNA hybridization is a commonly used tool for molecular phylogeny, comparing the similarities between genomes. The genomes of two organisms are heated up or “melted” to separate the complementary strand and then allowed to cool down. Strands that have complementary base sequences will re-anneal, while strands without complementation will remain upaired. Typically one source of DNA is labeled, usually with radioactivity, to allow for identification of each DNA source.

Nucleic acid sequencing, typically using the rRNAs from small ribosomal subunits, allows for direct comparison of sequences. The ribosomal sequence is seen as ideal because the genes encoding it do not change very much over time, nor does it appear to be strongly influenced by horizontal gene transfer. This makes it an excellent “molecular chronometer,” or way to track genetic changes over a long period of time, even between closely related organisms.

Phylogenetic trees serve to show a pictorial example of how organisms are believed to be related evolutionarily. The root of the tree is the last common ancestor for the organisms being compared (Last Universal Common Ancestor or LUCA, if we are doing a comparison of all living cells on Earth). Each internal node (or branchpoint) represents an occurrence where the organisms diverged, based on a genetic change in one organism. The length of each branch can indicate the amount of molecular changes over time, if the phylogenetic tree is scaled. The external nodes represent specific taxa or organisms (although they can also represent specific genes). A clade indicates a group of organisms that all have a particular ancestor in common. 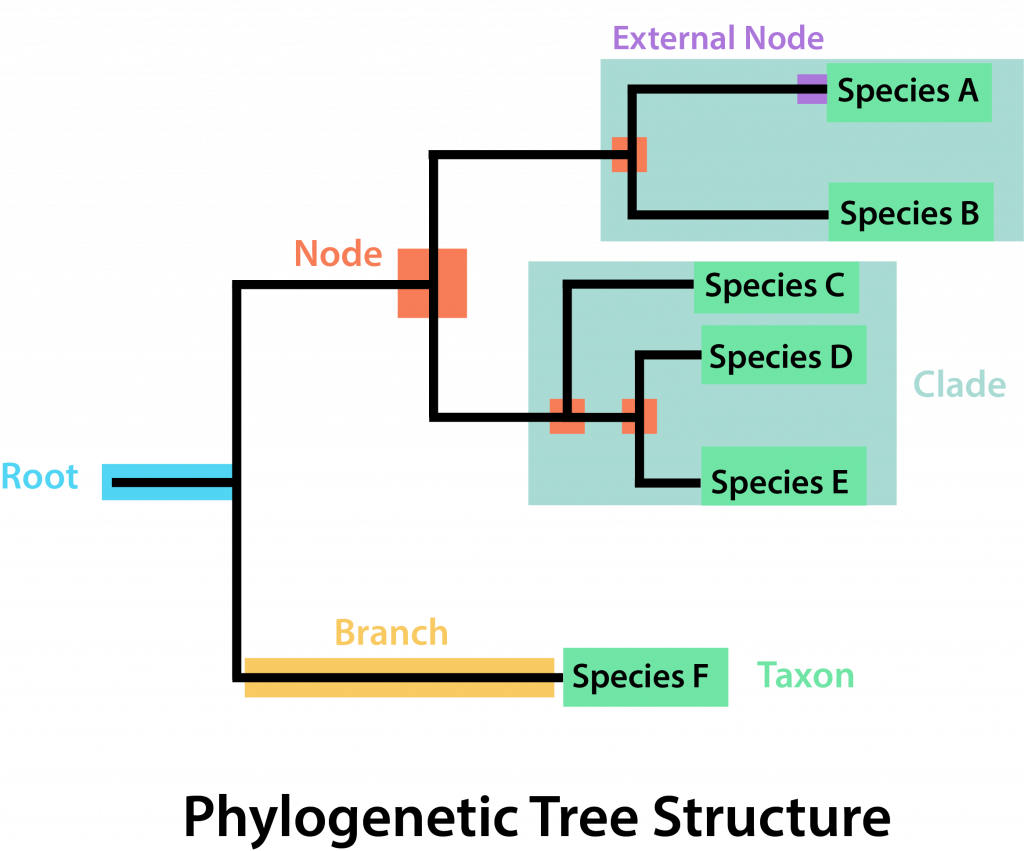 Taxonomy refers to the organization of organisms, based on their relatedness. Typically it involves some type of classification scheme, the identification of isolates, and the naming or nomenclature of included organisms. Many different classification schemes exist, although many have not been appropriate for comparison of microorganisms.

Currently there is no widely accepted “species definition” for microbes. The definition most commonly used is one that relies upon both genetic and phenotypic information (a polyphasic approach), with a threshold of 70% DNA-DNA hybridization and 97% 16S rRNA sequence identity in order for two organisms to be deemed as belonging to the same species.