All microbes have a need for three things: carbon, energy, and electrons. There are specific terms associated with the source of each of these items, to help define organisms.

Let us focus on carbon first. All organisms are carbon-based with macromolecules – proteins, carbohydrates, lipids, nucleic acid – having a fundamental core of carbon. On one hand, organisms can use reduced, preformed organic substances as a carbon source. These are the heterotrophs or “other eaters.” Alternatively, they can rely on carbon dioxide (CO2) as a carbon source, reducing or “fixing” it this inorganic form of carbon into an organic molecule. These are the autotrophs or “self feeders.”

These terms can all be combined, to derive a single term that gives you an idea of what an organism is using to meet its basic needs for energy, electrons, and carbon. 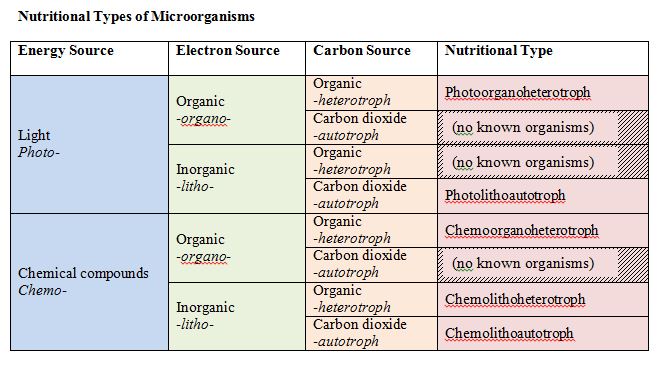 In addition to carbon, hydrogen and oxygen, cells need a few other elements in sufficient quantity. In particular, cells need nitrogen for the formation of proteins, nucleic acids, and a few other cell components. Cells also need phosphorous, which is a crucial component of nucleic acids (think sugar-phosphate backbone!), phospholipids, and adenosine triphosphate or ATP. Sulfur is necessary for a few amino acids, as well as several vitamins, while potassium is needed for enzymes, and magnesium is used to stabilize ribosomes and membrane. Collectively these elements (including C, H, and O) are referred to as the macronutrients.

Some microbes can synthesize certain organic molecules that they need from scratch, as long as they are provided with carbon source and inorganic salts. Other microbes require that certain organic compounds exist within their environment. These organic molecules essential for growth are called growth factors and fall in three categories: 1) amino acids (building blocks of protein), 2) purines and pyrimidines (building blocks of nucleic acid), and 3) vitamins (enzyme cofactors).

In order to support its’ activities, a cell must bring in nutrients from the external environment across the cell membrane. In bacteria and archaea, several different transport mechanisms exist.

Facilitated diffusion also involves the use of a concentration gradient, where the concentration of the substance is higher outside the cell, but differs with the use of carrier proteins (sometimes called permeases). These proteins are embedded within the cell membrane and provide a channel or pore across the membrane barrier, allowing for the passage of larger molecules. If the concentration gradient dissipates, the passage of molecules into the cell stops. Each carrier protein typically exhibits specificity, only transporting in a particular type of molecule or closely related molecules.

Primary active transport involves the use of chemical energy, such as ATP, to drive the transport. One example is the ABC system, which utilizes ATP-Binding Cassette transporters. Each ABC transporter is composed of three different components: 1) membrane-spanning proteins that form a pore across the cell membrane (i.e. carrier protein), 2) an ATP binding region that hydrolyzes ATP, providing the energy for the passage across the membrane, and 3) a substrate-binding protein, a peripheral protein that binds to the appropriate substance to be transporter and ferries it to the membrane-spanning proteins. In gram negative bacteria the substrate-binding protein is located in the cell’s periplasm, while in gram positive bacteria the substrate-binding protein is attached to the outside of the cell membrane.

Secondary active transport utilizes energy from a proton motive force (PMF). A PMF is an ion gradient that develops when the cell transports electrons during energy-conserving processes. Positively charged protons accumulate along the outside of the negatively charged cell, creating a proton gradient between the outside of the cell and the inside.

One of the best studied examples of group translocation is the phosphoenolpyruvate: sugar phosphotransferase system (PTS), which uses energy from the high-energy molecule phosphoenolpyruvate (PEP) to transport sugars into the cell. A phosphate is transferred from the PEP to the incoming sugar during the process of transportation.

Iron is required by microbes for the function of their cytochromes and enzymes, resulting in it being a growth-limiting micronutrient. However, little free iron is available in environments, due to its insolubility. Many bacteria have evolved siderophores, organic molecules that chelate or bind ferric iron with high affinity. Siderophores are released by the organism to the surrounding environment, whereby they bind any available ferric iron. The iron-siderophore complex is then bound by a specific receptor on the outside of the cell, allowing the iron to be transported into the cell.