Genetic engineering is the deliberate manipulation of DNA, using techniques in the laboratory to alter genes in organisms. Even if the organisms being altered are not microbes, the substances and techniques used are often taken from microbes and adapted for use in more complex organisms.

Steps in Cloning a Gene

Let us walk through the basic steps for cloning a gene, a process by which a gene of interest can be replicated many times over. Let us pretend that we are going to genetically engineer E. coli cells to glow in the dark, a characteristic that they do not naturally possess.

Introducing recombinant DNA into cells other than bacteria

Agrobacterium tumefaciens and the Ti plasmid

Agrobacterium tumefaciens is a plant pathogen that causes tumor formation called crown gall disease. The bacterium contains a plasmid known as the Ti (tumor inducing) plasmid, which inserts bacterial DNA into the host plant genome. Scientists utilize this natural process to do genetic engineering of plants by inserting foreign DNA into the Ti plasmid and removing the genes necessary for disease, allowing for the production of transgenic plants.

A gene gun uses very small metal particles (microprojectiles) coated with the recombinant DNA, which are blasted at plant or animal tissue at a high velocity. If the DNA is transformed or taken up by the cell’s DNA, the genes are expressed.

For a viral vector, virulence genes from a virus can be removed and foreign DNA inserted, allowing the virus capsid to be used as a mechanism for shuttling genetic material into a plant or animal cell. Marker genes are typically added that allow for identification of the cells that took up the genes.

CRISPR stands for Clustered Regularly Interspaced Short Palindromic Repeats (now you know why everyone just says CRISPR!). It refers to a family of DNA sequences that are commonly found in bacterial and archaeal genomes, where the sequences originally came from lysogenic bacteriophage. The cells use these DNA fragments, combined with the Cas9 (CRISPR-associated protein 9) enzyme, to identify and destroy similar DNA, thus preventing subsequent bacteriophage infections. But this natural gene editing process can be used to directly edit genomes in eukaryotic organisms as well, typically by either deleting a gene or by inserting a gene.

Gel electrophoresis is a technique commonly used to separate nucleic acid fragments based on size. It can be used to identify particular fragments or to verify that a technique was successful.

A porous gel is prepared made of agarose, with the concentration adjusted based on expected size. Nucleic acid samples are deposited into wells in the gel and an electrical current is applied. Nucleic acid, with its negative charge, will move towards the positive electrode, which should be placed at the bottom of the gel. The nucleic acid will move through the gel, with the smallest pieces encountering the least resistance and thus moving through the fastest. The length of passage of each nucleic acid fragment can be compared to a DNA ladder, with fragments of known size.

The polymerase chain reaction or PCR is a method used to copy or amplify DNA in vitro. The process can yield a billionfold copies of a single gene within a short period of time. The template DNA is mixed with all the ingredients necessary to make DNA copies: primers (small oligonucleotides that flank the gene or genes of interest by recognizing sequences on either side of it), nucleotides (the building blocks of DNA), and DNA polymerase. The steps involve heating the template DNA in order to denature or separate the strands, dropping the temperature to allow the primers to anneal, and then heating the mixture up to allow the DNA polymerase to extend the primers, using the original DNA as an initial template. The cycle is repeated 20-30 times, exponentially increasing the amount of target DNA in a few hours.

Genetically engineered organisms can be made so that a piece of DNA can be easily replicated, providing a large source of that DNA. For example, a gene associated with breast cancer can be spliced into the genome of E. coli, allowing for the rapid production of the gene so that it may be sequenced, studied, and manipulated, without requiring repeated tissue donations from human volunteers.

Antisense RNA is ssRNA that is complementary to the mRNA that will code for a protein. In cells it is made as a way to control target genes. There has been increasing interest in the use of antisense RNA as a way to prevent diseases that are caused by the production of a particular protein.

Since microbes replicate so rapidly, it can be extremely advantageous to use them to manufacture proteins of interest or value. Given the right promoters, bacteria will express genes for proteins that are not naturally found in bacteria, such as cytokine. Genetically engineered cells have been used to make a wide variety of proteins of use to humans, such as insulin or human growth hormone. 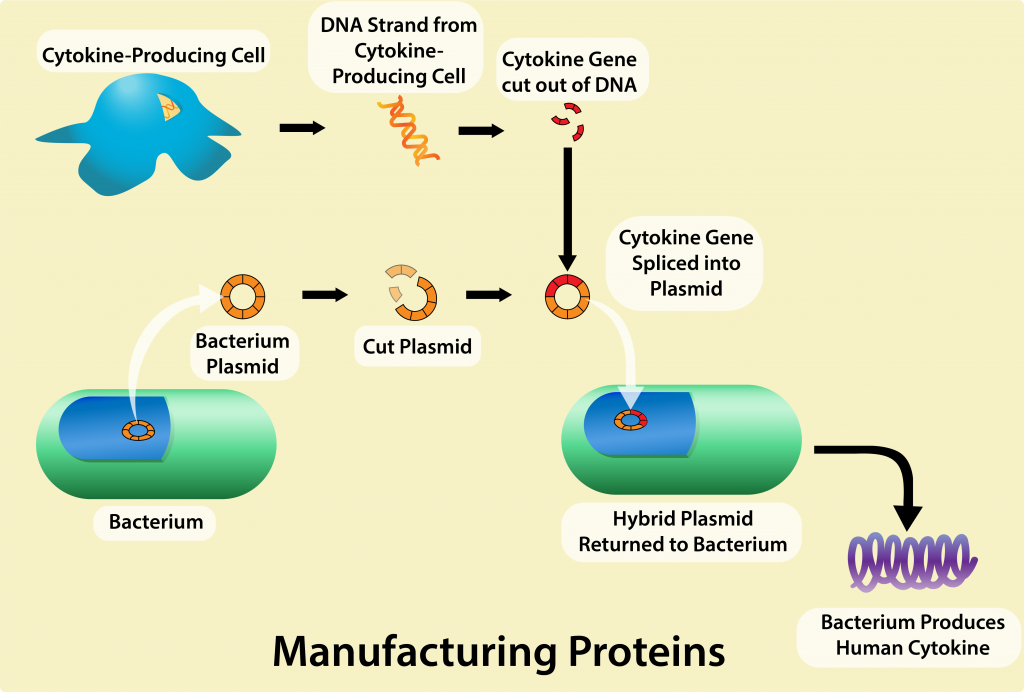