The Archaea are a group of organisms that were originally thought to be bacteria (which explains the initial name of “archaeabacteria”), due to their physical similarities. More reliable genetic analysis revealed that the Archaea are distinct from both Bacteria and Eukaryotes, earning them their own domain in the Three Domain Classification originally proposed by Woese in 1977, alongside the Eukarya and the Bacteria.

So, why were the archaea originally thought to be bacteria? Perhaps most importantly, they lack a nucleus or other membrane-bound organelles, putting them into the prokaryotic category (if you are using the traditional classification scheme). Most of them are unicellular, they have 70S sized ribosomes, they are typically a few micrometers in size, and they reproduce asexually only. They are known to have many of the same structures that bacteria can have, such as plasmids, inclusions, flagella, and pili. Capsules and slime layers have been found but appear to be rare in archaea.

While archaea were originally isolated from extreme environments, such as places high in acid, salt, or heat, earning them the name “extremophiles,” they have more recently been isolated from all the places rich with bacteria: surface water, the ocean, human skin, soil, etc.

There are several characteristics of the plasma membrane that are unique to Archaea, setting them apart from other domains. One such characteristic is chirality of the glycerol linkage between the phopholipid head and the side chain. In archaea it is in the L-isomeric form, while bacteria and eukaryotes have the D-isomeric form. A second difference is the presence of an ether-linkage between the glycerol and the side chain, as opposed to the ester-linked lipids found in bacteria and eukaryotes. The ether-linkage provides more chemical stability to the membrane. A third and fourth difference are associated with the side chains themselves, unbranched fatty acids in bacteria and eukaryotes, while isoprenoid chains are found in archaea. These isoprenoid chains can have branching side chains.

Like bacteria, the archaeal cell wall is a semi-rigid structure designed to provide protection to the cell from the environment and from the internal cellular pressure. While the cell walls of bacteria typically contain peptidoglycan, that particular chemical is lacking in archaea. Instead, archaea display a wide variety of cell wall types, adapted for the environment of the organism. Some archaea lack a cell wall altogether.

While it is not universal, a large number of Archaea have a proteinaceous S-layer that is considered to be part of the cell wall itself (unlike in Bacteria, where an S-layer is a structure in addition to the cell wall). For some Archaea the S-layer is the only cell wall component, while in others it is joined by additional ingredients (see below). The archaeal S-layer can be made of either protein or glycoprotein, often anchored into the plasma membrane of the cell. The proteins form a two-dimensional crystalline array with a smooth outer surface. A few S-layers are composed of two different S-layer proteins.

While archaea lack peptidoglycan, a few contain a substance with a similar chemical structure, known as pseudomurein. Instead of NAM, it contains N-acetylalosaminuronic acid (NAT) linked to NAG, with peptide interbridges to increase strength.

Methanochondroitin is a cell wall polymer found in some archaeal cells, similar in composition to the connective tissue component chondroitin, found in vertebrates.

Some archaea have a protein sheath composed of a lattice structure similar to an S-layer. These cells are often found in filamentous chains, however, and the protein sheath encloses the entire chain, as opposed to individual cells. 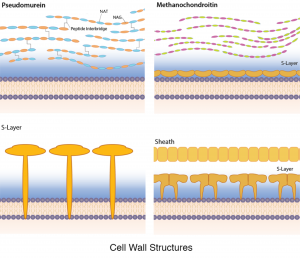 While archaea have ribosomes that are 70S in size, the same as bacteria, it was the rRNA nucleotide differences that provided scientists with the conclusive evidence to argue that archaea deserved a domain separate from the bacteria. In addition, archaeal ribosomes have a different shape than bacterial ribosomes, with proteins that are unique to archaea. This provides them with resistance to antibiotics that inhibit ribosomal function in bacteria.

Many of the structures found in bacteria have been discovered in archaea as well, although sometimes it is obvious that each structure was evolved independently, based on differences in substance and construction.

Cannulae, a structure unique to archaea, have been discovered in some marine archaeal strains. These hollow tube-like structures appear to connect cells after division, eventually leading to a dense network composed of numerous cells and tubes. This could serve as a means of anchoring a community of cells to a surface.

Another structure unique to archaea is the hamus, a long helical tube with three hooks at the far end. Hami appear to allow cells to attach both to one another and to surfaces, encouraging the formation of a community.

Pili have been observed in archaea, composed of proteins most likely modified from the bacterial pilin.  The resulting tube-like structures have been shown to be used for attachment to surfaces.

The archaeal flagellum, while used for motility, differs so markedly from the bacterial flagellum that it has been proposed to call it an “archaellum,” to differentiate it from its bacterial counterpart.

What is similar between the bacterial flagellum and the archaeal flagellum? Both are used for movement, where the cell is propelled by rotation of a rigid filament extending from the cell. After that the similarities end.

Currently there are two recognized phyla of archaea: Euryarchaeota and Proteoarchaeota. Several additional phyla have been proposed (Nanoarchaeota, Korarchaeota, Aigarchaeota, Lokiarchaeota), but have yet to be officially recognized, largely due to the fact that the evidence comes from environmental sequences only.