The Policy Question: Is a Tax Credit on Hybrid Car Purchases the Government’s Best Choice to Reduce Fuel Consumption and Carbon Emissions?

The U.S. government, concerned about the dependence on imported foreign oil and the release of carbon into the atmosphere, has enacted policies where consumers can receive substantial tax credits toward the purchase of certain models of all-electric and hybrid cars.

This credit may seem like a good policy choice but it is a costly one, it takes away resources that could be spent on other government policies, and it is not the only approach to decreasing carbon emissions and dependency on fossil fuels.   So how do we decide which policy is best?

Suppose that this tax credit is wildly successful and doubles the average fuel economy of all cars on U.S. roads (this is clearly not realistic but useful for our subsequent discussions).  What do you think would happen to the fuel consumption of all U.S. motorists?  Should the government expect fuel consumption and carbon emissions of U.S. cars to decrease by half in response?

The answers to these questions are critical when choosing among the policy alternatives.   In other words, is offering a subsidy to consumers the most effective way to meet the policy goals of decreased dependency on foreign oil and carbon emissions? Are there more efficient—that is, less expensive–ways to achieve these goals?   The ability to predict with some accuracy the response of consumers to this policy is vital to determining the merits of the policy before millions of federal dollars are spent.

In this module, we will study preferences in economics.

Learning Objective 1.3: Relate the properties of indifference curves to assumptions about preference

To build a model that can predict choices when variables change, we need to make some assumptions about the preferences that drive consumer choices.

Economics makes three assumptions about preferences that are the most basic building blocks of our theory of consumer choice.

To introduce these it is useful to think of collections or bundles of goods. To simplify, let’s identify two bundles, A and B.  The way we think of preferences always boils down to comparing two bundles.  Even if we are choosing among three or more bundles, we can always proceed by comparing pairs and eliminating the lesser bundle until we are left with our choice.

The three fundamental assumptions about preferences are:

The most important results of our model of consumer behavior hold when we only assume completeness and transitivity, but life is much easier if we assume more is better as well.  If we assume free disposal (we can get rid of extra goods at no cost) the assumption that more is better seems reasonable. It is certainly the case that more is not worse in that situation and so to keep things simple we’ll maintain the standard assumption that we prefer more of a good to less.

Our model works well when these assumptions are valid, which seems to be most of the time in most situations. However, sometimes these assumptions do not apply.  For instance, in order to have complete and transitive preferences, we must know something about the goods in the bundle.  Imagine an American who does not speak Hindi entering an Indian restaurant where the menu is entirely in Hindi.  Without the aid of translation, the customer cannot act as economic theory would predict.

Individual preferences, given the basic assumptions, can be represented using something called indifference curves.  An indifference curve is a graph of all of the combinations of bundles that a consumer prefers equally.  In other words, the consumer would be just as happy consuming any of them.  Representing preferences graphically is a great way to understand both preferences and how the consumer choice model works – so it is worth mastering them early in your study of microeconomics.

Bundles can contain many goods, but to simplify, we will consider only pairs of goods.  At first, this may seem impossibly restrictive but it turns out that we don’t really lose generality in so doing. We can always consider one good in the pair to be, collectively, all other consumption goods.  What the two-good restriction does so well is to help us see the tradeoffs in consuming more of one good and less of another. 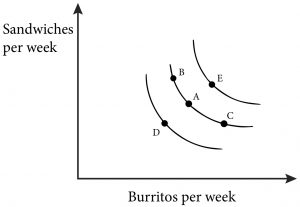 Now we can ask what bundles are better, worse, or the same in terms of satisfaction to this college student.  Clearly bundles that contain less of both goods, like bundle D, are worse than A, B or C because they violate the more is a better assumption.  Equally clear is that bundles that contain more of both goods, like bundle E, are better than A, B, C, and D because they satisfy the more is better assumption.

Notice also that these curves share a number of characteristics: they slope downward, they do not cross and they are all bowed in. We explore these properties in more detail in the next section.

Learning Objective 1.3: Relate the properties of indifference curves to assumptions about preference.

As introduced in Section 1.2, indifference curves have three key properties:

To understand the first two properties, it’s useful to think about what happen if they were not true. 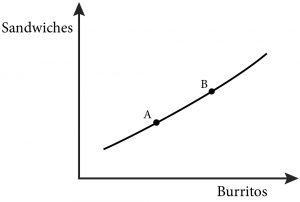 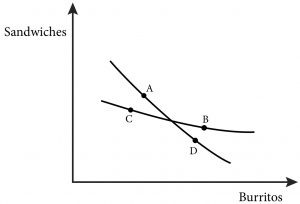 Now we come to the third property: indifference curves bow in.  This property comes from a fourth assumption about preferences, which we can add to the assumptions discussed in Section 1.1:

The assumption that consumers prefer variety is not necessary, but still applies in many situations.  For example, most consumers would probably prefer to eat both sandwiches and burritos during a week and not just one or the other (remember this is for consumers who consider them both goods – who like them).  In fact, if you had only sandwiches to eat for a week, you’d probably be willing to give up a lot of sandwiches for a few burritos and vice versa.  Whereas if you had reasonably equal amounts of both you’d be willing to trade one for the other but at closer to 1 to 1 ratios.  Notice that if we graph this we naturally get bowed in indifference curves, as shown in Figure 1.3.3. Preference for variety implies indifference curves are bowed in.

Figure 1.3.3 Preference for Variety Means that Indifference Curves are Bowed In. 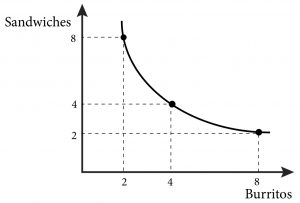 Remember these three key points about preferences and indifference curves:

From now on we will assume that consumers like variety and that indifference curves are bowed in. However, it is worth considering examples on either extreme: perfect substitutes and perfect complements.

When we move along an indifference curve we can think of a consumer substituting one good for another.  Two bundles on the same indifference curve, which represent the same satisfaction from consumption, have one thing in common: they represent more of one good and less of the other.   This makes sense given our assumption of ‘more is better’; if more of one good makes you better off, then you must have less of the other good in order to maintain the same level of satisfaction.

In economics we have a more technical way of expressing this tradeoff: the marginal rate of substitution.  The marginal rate of substitution (MRS) is the amount of one good a consumer is willing to give up to get one more unit of another good and maintain the same level of satisfaction. This is one of the most important concepts in economics because it is critical to understanding consumer choice.

Mathematically, we express the marginal rate of substitution for two generic goods like this:

where Δ indicates a change in the quantity of the good.

In the case of our student consuming burritos and sandwiches, the expression would be:

Note that the MRS is negative because it represents a tradeoff: more sandwiches for fewer burritos.

Figure 1.4.1 illustrates the marginal rate of substitution for burritos and sandwiches graphically.

Figure 1.4.1 Marginal rate of substitution for burritos and sandwiches. 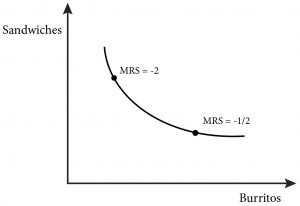 We have now studied the assumptions upon which our model of consumer behavior is built:

We have also seen how these assumptions govern the properties of indifference curves.

It is worth taking a moment to think about two other types of preference relations that are special cases but not uncommon: perfect complements and perfect substitutes.

Perfect complements are goods that consumers want to consume only in fixed proportions.

Figure 1.5.1: Indifference Curves for Goods that are Perfect Complements 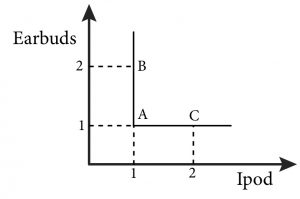 Perfect substitutes are goods about which consumers are indifferent as to which to consume.

Drawing indifference curves for perfect substitutes is straightforward as shown in Figure 1.5.2.

Figure 1.5.2: Indifference Curves for Goods that are Perfect Substitutes 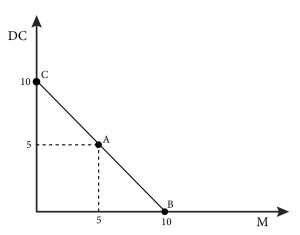 Figure 1.5.3: The Relationship between Indifference Curves for Well Behaved Preferences and Perfect Complements and Substitutes 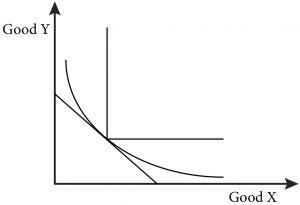 The issue of consumer preferences is central to the real-world policy question posed at the beginning of this module.

Recall that we are assuming that the tax credit will cause the average fuel economy of U.S. cars to double. So, from a consumer behavior perspective, one of the things we want to know in evaluating the policy is whether this improvement in gas mileage will cause an equivalent decrease in the demand for gasoline.  In other words, the consumer decision is about the tradeoff of purchasing gasoline to travel in a car versus all of the other uses of the money spent on gas.

We can apply the principle of preferences and the assumptions we make about them to this particular question by drawing indifference curves, as shown in Figure 1.6.1

Figure 1.6.1: Indifference Curve for Miles Drives versus Money Spent on All Other Goods 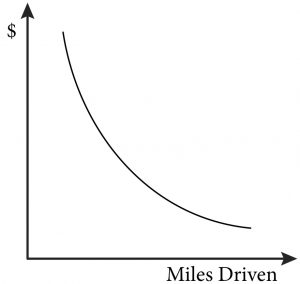 We can label one axis of the indifference curve map “miles driven” and the other “money for other consumption.”  Doing so illustrates how confining ourselves to only two dimensions is really not that confining at all.  By considering the other axis as money for all other purchases we are really looking at the general trade-off between one particular consumption good and everything else that a consumer could possibly consume.

So, what would our indifference curve look like? As before it would be downward sloping – surely traveling more by car affords the consumer more freedom of movement and therefore more consumption choices, both of which are a good. The indifference curves would not cross for the same reasons discussed in section 1.3. But what about the principle of more is better?  The point here is to again think about the principle of free disposal: as long as the ability to drive more miles is not bad (and it is hard to imagine how it could be) then more miles are never worse.

The remaining question is whether the preference for variety is a good assumption in this case.  It is helpful to consider the extremes: for those consumers who own cars, never driving any miles is probably not very practical.  Likewise spending one’s entire income only on expenses relating to driving one’s car is unappealing.  A good assumption, then, is that most people with a car would prefer some combination of miles driven and other consumption to either extreme and we can draw our indifference curves as convex to the origin.

We are not yet in a position to say much about the policy itself, but we have one piece of the model we will use to analyze it. With this indifference curve we can move on to the other pieces of the model that we will study in Modules 2, 3 and 4.

Learning Objective 1.3: Relate the properties of indifference curves to assumptions about preference.

Intermediate Microeconomics by Patrick M. Emerson is licensed under a Creative Commons Attribution-NonCommercial-ShareAlike 4.0 International License, except where otherwise noted.