The rigid exoskeleton, also called the “cuticle”, of insects enables them to do many things, but is an obstacle to growth. In order to grow, an insect must periodically shed its exoskeleton and grow a new one that is larger. The process whereby a new cuticle is formed and the old one is shed is called molting. Molting is a complex process which is controlled by hormones.

During insect growth and molting, each successive stage may appear similar to the preceding stage, or the appearance may change from stage to stage. This change in form from molt to molt is called metamorphosis. There are four types of metamorphosis:

As the insect develops, an interaction between three hormones regulates development in time with ecdysis events in response to environmental and physiological cues. 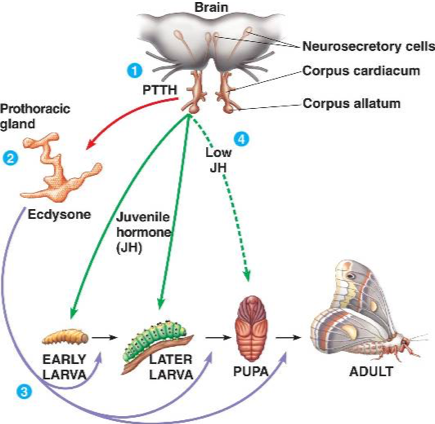 When the brain receives the appropriate cue, which may be soil temperature for an overwintering insect, day length, or any number of factors, it causes the brain to release Prothoracicotropic Hormone, also called PTTH or simply “brain hormone”. PTTH acts on the prothoracic gland(hence the long name), stimulating the gland to release the hormone Ecdysone. When released, ecdysone triggers an ecdysis event.

The final hormone in the interaction regulates the degree of maturity of the stages between ecdysis events, called “instars”. Juveniles and larvae may go through several immature instars, molting between each and maturing slightly with each stage before becoming a mature adult. As they develop, a special section of the brain called the corpus allatum secretes Juvenile Hormone, known simply as “JH”. The more JH present in the insect, the more immature the tissues remain. JH levels are high in early instar immature insects, and tapers off as the insect matures: less Juvenile Hormone means a less juvenile insect. Juvenile Hormone is in the lowest concentration in the last stage of immaturity: the last juvenile instar or the pupal stage for holometabolous insects. The absence of juvenile hormone at the last ecdysis event allows mature adult tissues to form, including functional wings and mature reproductive systems.

There are a few further conditions that may vary development. Define the following, and give an insect example.

The more recently derived (evolved) insect orders are the holometabolous orders, while ametabola, then hemi- and paurometabola are considered more primitive conditions. With the energetic expenditure of metamorphosis and the extended time spent in a vulnerable pupal stage, why do you supposed was favored as a life history strategy and preserved evolutionarily? What are the benefits or reasons for metamorphosis? Defend your answer.