I. Closely examine the HEAD of your cockroach. As best as you can, draw the face, noting the Compound eyes, ocelli, antennal scales, hairs, and mouthparts.

There are two main kinds of arthropod mouthparts: mandibulate (chewing) and haustellate (piercing/sucking; insects only). They are both made of the same basic components, but can be highly modified to exploit a variety of food resources. In the diagram to the right, draw a circle around the insects with haustellate mouthparts. 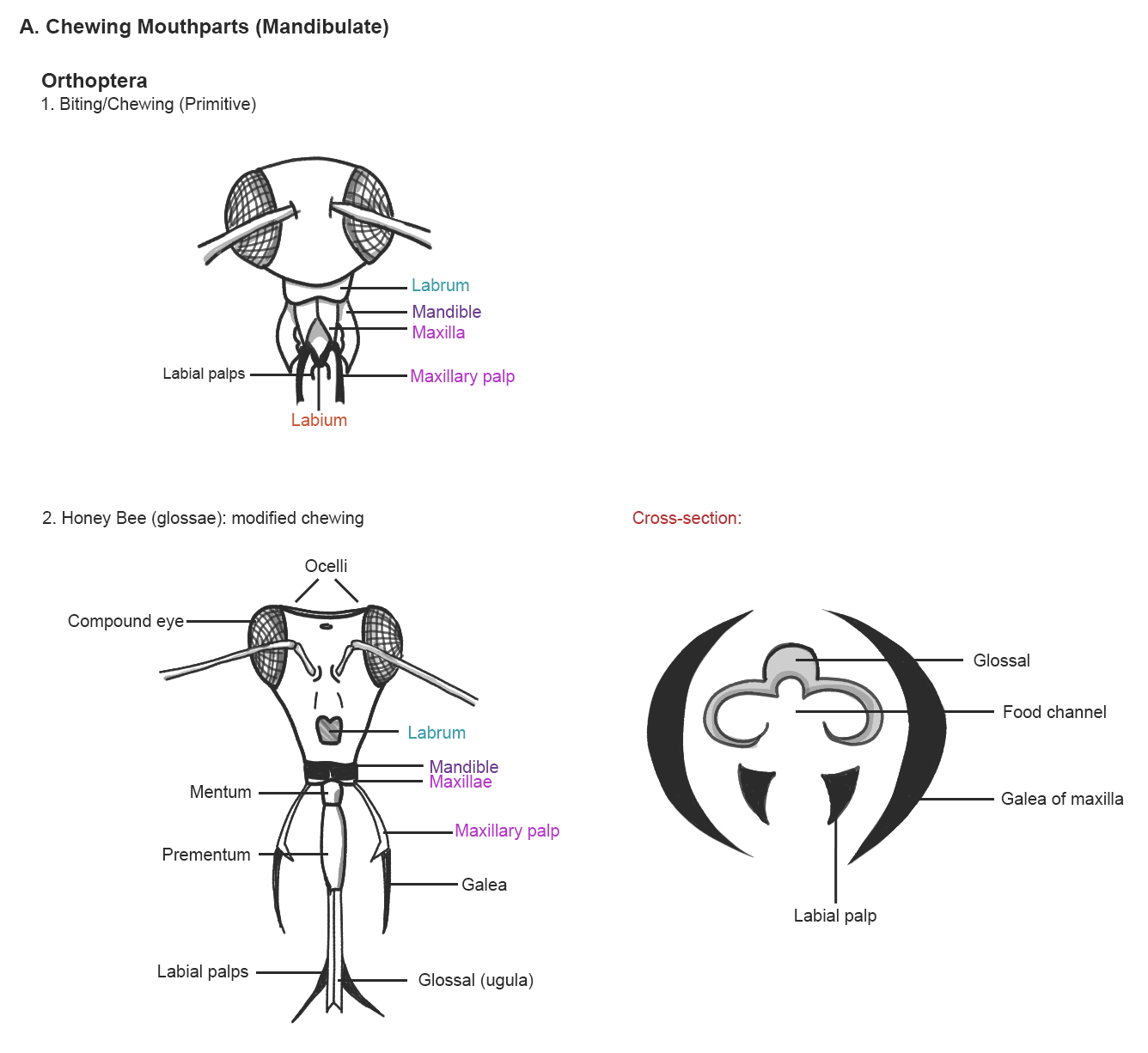 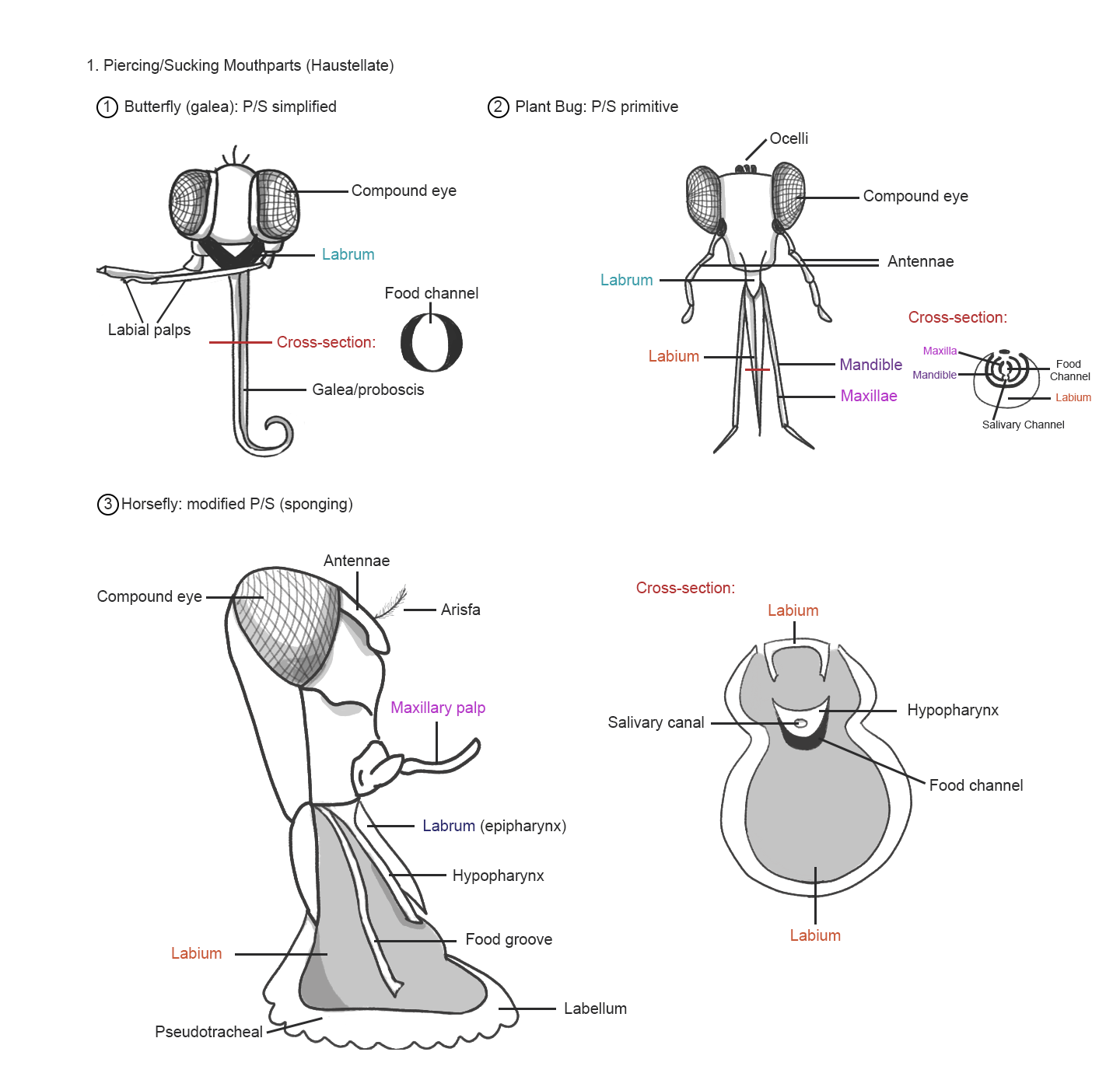 Looking closely at your specimen, not there is a thin, flexible plate-like sclerite (scale) that extends above the mouthparts like an upper lip. This is the labrum. The role of the labrum is to contain the food in the oral cavity while the mandibles and maxilla shred the food item. Gripping the head of the cockroach firmly, gently lift the labrum with a pair of dissection scissors and cut it from the front (the frontal plate of the head) as close to the attachment point as possible.

Below the labrum are two large, durable mandibles. They will be large enough to cover all the underlying mouth parts, their size an indication of their importance for crushing, tearing and grinding food. They open from side to side, not up and down. They are tough, rigid structures and will be difficult to open and remove to see the maxillae beneath. Using a pair of rigid forceps, grip one mandible and pull gently to open and separate it from the other. Wiggling the mandible gently from side to side, remove it, tearing through the muscle attachments.

Once the mandibles are removed or opened, the other pair of mouthparts that will be evident are the maxillae. The maxillae also meet on a vertical axis, but have only one dark sclerotic projection while the mandibles have an entire margin of dark, serrated teeth. The mandibles also have a pair of long, finger-like palps projecting from the outside margin. These palps assist in shoving food into the alimentary canal as the insect feeds.  Grip one maxillae gently from the base (do NOT pull on the palp) to remove.

The remaining mouthpart hanging down should be the labium, or “lower lip” as it is sometimes called. This is the floor of the oral cavity, the right and left parts fused into one with a pair of labial palps projecting forward. Grip the labium from the base and pull to remove.

5. Following removal of all previous mouthparts, a fleshy, tongue-like projection can be seen protruding from the alimentary canal. This is the hypopharynx, the structure involved with taste perception, and more importantly with suction. In haustellate insects, the hypopharynx is well-developed and responsible for withdrawing fluid from the host for consumption.

Draw (and label) the individual parts, the labrum, mandible, maxillae (with palp), hypopharynx and labium (with palp) below.

Examine the mouthpart modifications diagram on the next page. In the upper left corner, you should recognize mandibulate mouthparts from the dissection you completed. Moving right are examples of honey bee mouthparts, also mandibulate but with a modified “glossae” which operates as a long tongue.

In the second row, the haustellate mouthparts of a mosquito are shown on the left, and a cross section of the proboscis on the right. In haustellate insects, the same mouthpart components are present, though elongated and modified into bristles. These bristles are pressed together to form a stylet, a structure with separate channels for injection of saliva (salivary groove) and removal of food item (food channel). Note the size of the hypopharynx in the examples of haustellate mouthparts – this is the organ responsible for drawing the fluid out of the host and up through the food canal.

The mosquito is a primitive example of haustellate mouthparts; from there, oral modifications become even more specified to food resource by fusing structures to create new appendages (the labellular organ of a house fly) or reducing/losing structures completely (the simple proboscis of a butterfly).

What is the function of the labellum and pseudotracheae (housefly)?

In many holometabolous (we’ll get into this next week) insects – insects with a pupal stage – the larvae frequently have different mouthparts than the mature adults. Why do you suppose this has occurred? (Example: mandibulate caterpillar, haustellate butterfly/moth)

Internal Organ Systems of the Insects 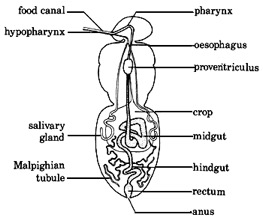 The digestive system of insects is composed of the mouth parts and the alimentary canal, both of which can be specialized in structure and function to correlate with specific diets. When the food supply of a particular insect group is readily available (such as insects that feed on plant parts), the gut is usually short and without storage capacity. However, if an insect is predacious, the gut is modified for storage to compensate for the long time periods a predator may go without a prey item.

There are three main regions of the alimentary canal: the foregut, the midgut, and the hindgut. Each section is separated from the other by valves which control the movement of food between regions. The foregut functions to ingest, store (crop) and grind (Proventriculus) the food before it is passed to the midgut. The majority of digestive enzyme production occurs in the midgut region (from the gastric cacao and midgut wall), as does the absorption of the products of digestion (proteins, carbohydrates, minerals, salts, water, lipids). The hindgut functions in final absorption of salts and water prior to the elimination of the feces through the anus.

The exoskeleton lines the foregut and the hindgut and thus is shed with each ecdysis event. The midgut is the only section with a lining that is not shed.

Insects eliminate wastes in a variety of ways they often absorb some waste products in specialized cells alongside the heart. These cells are called pericardial cells and this form of excretion is termed storage excretion. Other cells and organs may be involved in storage excretion. For example, the fat body and certain reproductive organs may store massive amounts of uric acid (one of the main waste products protein metabolism) and thus often appears in varying shades of yellow depending on concentration.

The primary urinary vessels in insects are the Malpighian tubules. These tubes empty into the pylorus. They vary in number from very few to hundreds depending upon the insect. One part of the tubule often absorbs water and salts from the hemolymph and some of these are again reabsorbed at another part of the same tubule. Urine flow in insects is controlled by potassium ions; then the amount of this salt is high, there is an increase in urine flow. Then the amount of potassium, urine flow ceases. Uric acid is often excreted by way of the Malpighian tubules. 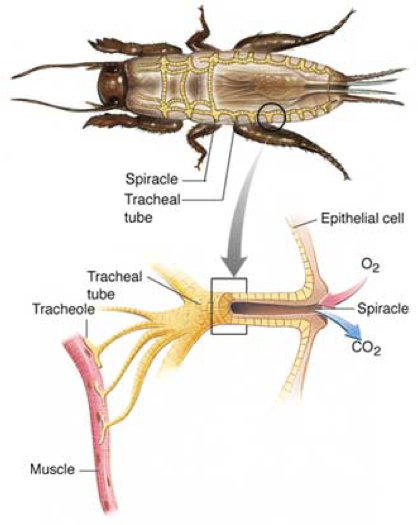 Most insects breathe through a system of special branching tubes called tracheae. The openings into these tracheal tubes are along the body wall, usually at the lateral margin, and are called spiracles. Spiracles play a role in water retention, and are therefore usually kept tightly closed. Tracheal tubes are lined with a fine, tightly-wound spiral of chitin called the taenidia. The taenidia acts to strengthen the tracheal tubes against collapse while still allowing the tubes to be flexible. As the tracheal tubes approach an organ, they tend to get finer. The finest tracheal branches are termed tracheoles.

In insects where the tracheae open to the exterior via the spiracles, respiration is said to occur through an open tracheal system. However, in some insects and insect larvae, spiracles are absent. In this case, the tracheae form a subcutaneous network that covers the body surface. In this case, gas exchange occurs directly through the integument in what is termed a closed tracheal system. The trachea lead directly into the muscle cells, providing direct oxygenation without using blood or capillary transfer.

Insects have an open circulatory system. A dorsal blood vessel serves as the main as the main blood vessel in insects. Outside of this dorsal vessel, the blood circulates freely within the insect body cavity. The posterior (rear) portion of the vessel, which is known as the heart, is subdivide into a series of chambers, each with an ostia through which blood may enter. The anterior (front) portion of the dorsal blood vessel is known as the aorta. Rather than pumping to circulate blood, the dorsal vessel uses a peristaltic wave, much like swallowing in humans, to create a current of flow in the body of the insect. There may be additional accessory pumping organs in some insects to prevent pooling – for example, in the insect foot or base of the wings.

Because it differs so much from the circulatory fluid of humans, the “blood” of an insect is called hemolymph. The hemolymph of insects transports nutrients, hormones, and waste products. The cells which circulate in the hemolymph are called hemocytes. Hemocytes vary in size, shape, and function. Some hemoctyes are capable of phagocytosis and encapsulation, while others function in coagulation and wound healing.

The internal reproductive system of female insects consists of pair of ovaries, the lateral and median oviducts (through which the eggs pass to the outside), a spermatheca (which stores sperm until they are needed for fertilization), a genital chamber (which is where fertilization generally occurs), and the accessory glands. Each ovary consists of a cluster of ovarian tubes, known as the ovarioles. The ovarioles contain a series of developing eggs, which will be passed into the lateral oviduct upon maturation.

The male reproductive system consists of a pair of testes, each of which contained a series of sperm tubes in which the spermatozoa are produced. Mature sperm are passed through the seminal vesicles, and out of the insect through the ejaculatory duct. The paired accessory glands may serve a variety of functions in male insects. Secretions from these gland may surround the spermatozoa to form a spermatophore or may nourish the spermatozoa during sperm transport into the female.